A Feldip hells area quest with an ogre resting ground that is now crawling with undead skeleton and zombie ogres. You must get to the bottom of it, by venturing int the crypts of Gu’Tanoth. 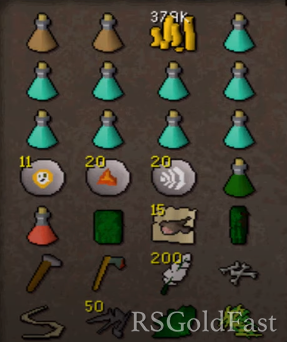 - Achey Logs (Can be obtained during the quest)

- Knife (Can be obtained during the quest)

- Nails (Depending on your smithing level)

- Vial of water, Rogue’s Purse and Snakeweed to make relycym’s balm, as you’ll need to if you’re combat is below 89 (Sanfew serum Is an alternative)

- Combat/Ranged/Magic potions because being diseased will reduce your stats

- Ring of duelling to teleport to castle wars and ferox enclave

To start this quest, speak to Grish who is located at Jiggig, just south once the bridge connecting to castle wars is crossed. Fairy ring can also be used (b*k*p). He will inform you about the zogres coming from beneath the ground and making people sick. At the end of the conversation, he will give you two supers restore potions and three cooked chompy birds. Head east and talk to the ogre guard and mention Grish to him so that he opens the barricade to allow too into the area. Keep heading east and head down the stairways.

Make sure you carry your super restore potions as you’ll now be diseased upon entering the cave if you’re below 89 levels in combat. You will also be aggro towards the Zogres / Skogres (Level 44).

Head north-west till you reach an area with a blackened floor, where you’ll then enter into a cut scene. Once it’s over, search the broken lectern to find a torn page containing a spell. Just adjacent to the lectern, you’ll find a skeleton, search it and a zombie will appear. Kill the zombie to obtain a ruined backpack and open it to obtain a dragon inn tankard, rotten foot and a knife. There will also be a coffin next to the skeleton, search it and then use the obtained knife on it, it will then unlock. Search the coffin to obtain a black prism and head back the same way you came to exit the cave or you can just teleport out.

If you’re still diseased, an easy way to cure yourself is to enter the Nightmare Zone in practice mode and then leave the arena. You can also teleport to Ferox Enclave with your ring, enter the free for all portal and then exit to cure yourself.

Now, proceed to yanille using the minigame teleport that will have the option of Nightmare Zone or simple use the watchtower teleport if you’ve completed the watchtower quest. You can also use a fairy ring that is close to Yanille (c*I*q). Make your way to the dragon inn located in the southwestern part of yaniile and use the tankard in your inventory on the bartender. He will then explain that the item belonged to brentle vahn, a customer who has been seen a couple of times with a shady wizard. Go to the wizards’ guild and talk to zavistic rarve on the ground floor. To identify him, he’ll be wearing a white and blue coloured robe, a little different from the other wizard robes. In any case, if you don’t have the required level to enter, simply ring the bell and he will appear outside. Once he sees the prism and torn pages, he’ll ask you to talk to sithik ints who is located in the guest house north of the guild.

Go to the top floor of the house and speak to sithik in the westernmost room. He will tell you that he has no connection to the Zogres and challenge you to prove that he is guilty. Search his room; his drawers, cupboards and wardrobe to find a book of portraiture, book of necromancy, papyrus, charcoal and a book of H.A.M. Read all the three books and use the portraiture on sithik and he will ask you to try portraiture yourself, so just use the papyrus on him to draw him a portrait. If he likes the truth of the portrait, you’ll have to drop it and make a new one, and if he likes honesty in it then keep it. Examine it to read the following words “A classic realist charcoal portrait of Sithik”.

Take the portrait and the tankard back to the bartender. He will recognise Sithik as the shady wizard who was seen with brentle and will sign the portrait as proof. Head to the magic guild show the book of necromancy, a book of H.A.M, tankard and the signed portrait to Zavistic Rarve, which will be enough evidence to give you a strange potion to use it on Sithik. Use this potion on the cup of tea in Sithik’s dresser, head down the ladder and climb back up to find that he has turned into an ogre. Talk to him and he’ll confess everything, which will also help you make Relicym’s balm and brutal arrows.

Having the balm in the final fight will help a lot, so it’s your choice whether to obtain it now or not as the quest can be done otherwise. You can also buy the balm from the grand exchange, as the item is tradeable. It can be made by using a rogue’s purse on a vial of water and then adding snakeweed to it. Using Brutal arrows to kill Zogres is one of the best ways and to shoot them you’ll need a composite ogre bow. You can make one by using a knife on achey tree logs with some wolf bones and then add bowstring to it.

Arrows can be fletched into ogre arrow shafts, and then by adding feathers on it. In the end, use nails on the arrow along with a hammer to make the brutal arrows.

Giving the balm to Uglug Nar is highly recommended as he will give access to a store that sells 100 of these balms, as well as give you enough money to buy them back. If you give him 4-doses of balm, he’ll give you 1000 Gold Coins. The store also sells Achey logs, bowstrings, cooked chompy and knives.

Now, return to grish to tell him everything that is going on and he’ll give you a key to access the ceremonial chamber in search of some old items. During the process, you’ll find an NPC named Slash Bash guarding the items, who is also weak to brutal arrows and crumble undead spell. He drains prayer rapidly and melee is not very effective with him, so prepare accordingly and remember to bring the balm along with you. Head back to the cave and continue west till you see two locked doors and go downstairs. In the end, you’ll find a wide room, search the stand for Slash Bash to spawn. You can use the safe-spot as shown in the picture to your left and remember to keep your protection from ranged prayer on. Upon defeating him, collect the bones and the artefacts that he drops. Go back to grish, talk to him and the quest will be completed.

Rsgoldfast Guides abou runescape, hope help you. And buy OSRS Gold now, get more off gold from us, enjoy.