Wanted is a part of the Temple Knight quest series and since you’re now recruitment to the knights, you are tasked to hunt down an overpowered wizard named Solus Dellagar. He has performed several mass murders and is on the loose, it is all up to you to track him down. 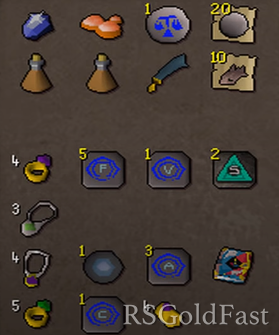 · 10,000 Gold Coins, or; A Law Rune, Enchanted Gem (Can be obtained from a slayer master), Lump of Molten Glass

· A Source of Light

To start this quest, you must first talk to Sir Tiffy Cashien in Falador park. Ash him for a job and he will tell you that an error is made by one of the clerks and you’ve been ranked in becoming a temple knight. Since you have to have an experience of five years to work there, Sir Tiffy will give you an alternative solution by talking to Sir Amik Varze in the white knights’ castle.

Make your way to Sir Amik by climbing two sections of the stairs on the west side of the castle. He will ask you to become a squire and you will have to decline to continue the conversation because if you do so, he will ask you to bring him Asgarnian Ale and can be undone by talking to tiffy again. To become a deputy, you must first go through a crisis, but as there is none right now, head back and talk to tiffy. He will tell you about the recent crisis that has occurred, so head back to sir amik again to known about Solus Dellagar, who is titled the “Infamous murder mage”. He will also tell you that they are unable to capture him as he is overpowered and the final solution is to kill him. This is where you join the other knights and accept the mission to track him down and capture him.

Now that you’re an agent, go back to tiffy and he will give you an orb for communication. He will give it to you for 10,000 gold coins or you can simply choose to bring the supplies to him to make you one. This is an important item and will be needed throughout the quest to keep in touch with Savant by using the option “Contact”. First, you will have to investigate the black knights’ hideout that is located in the taverly dungeon, and then make your way to the “mage of zamorak” located in Varrock, who helps with the skill of Rune Crafting.

To get to the dungeon, head west from the bank of Falador by using the agility shortcut and then head north-west to the city of Taverly until you see a ladder. Climb down, head north, then east, then south past the scorpions, magic axes and chaos dwarves. Do not cross the bridge, and then go past the hill giants, right into the black knights’ room. Beware as the knights are aggro if your combat level is below level 67.

Talk to Lord Daquarius here who can be found in the southwestern room. He will tell you nothing when you talk to him, at the same time savant will contact you through the orb and will advise you to bluff him so that he can give you something. Kill any black knight there to scare the lord and he will start to spill information about the wizard that he located in an area with a lot of furs.

Now, head to the river between edgeville and grand exchange to find the “mage of zamorak”. Do remember not to wear any items related to any other gods (Guthix or Saradomin) or else the mage will not talk to you. He will ask you to meet him somewhere in the city of Varrock, so head to the chaos altar that is located in the temple just south-east of Varrock. Also, grab 20 un-noted essences before you go there. If the mini-quest has already been completed, directly go to the altar with the essence in your inventory.

On talking to him about Solus Dellagar, he will give you information on him in return for the communication orb. However, it is useless to him, so he will agree to the un-noted essence. He will then tip you that solus is somewhere east, and connecting fur with east, you start to realize that he is somewhere in canifis.

Make your way to canifis through any of the following methods; Ectophial to get to port phasmatys and then walk your way there, slayer tower using a slayer ring, then run south, use the fairy ring (c*k*s), or simply use the teleport tab to fenkenstrain’s castle to reach nearby. Once you’re there, enter the bank of canifis and the savant will call to tell you that solus is using a slow teleport spell to keep himself invisible. Use the option “Scan” on your communication orb and walk around the town to locate him. He will suddenly appear, talk to you and then disappear again.

As this happens, savant will inform you that she was able to grab some items from solus as he appeared and this will help her find his next whereabout. Every item will be a hint to where he can be next, so you will have to run around in-game to keep getting hints. All the locations are random, apart from the 2nd, 5th and 7th, which is the champions’ guild, dorgesh-kaan mine and the rune essence mine.

The items that are found in predetermined order are given below:

It is the second location where solus will hit you with a smoke barrage that will either poison or damage you.

It is the fifth location where you will need a light source as it is very dark. You will have to follow Kazgar across the dungeon and scan through the orb on the way. While you scan the area, a woman will appear claiming she was taken hostage by solus, but it will turn out to be solus himself in disguise and he will then punch you and leave.

The seventh and the final location where solus will appear and the fight will begin.

The items list that you may receive in random is given below:

The final and the seventh hint will be the rune essence mine, so grab your armour and weapon and get ready to find the mass murderer. Once you reach there, savant will disable teleports so that solus doesn’t run away again. You will have the help of 15 rangers, but they will all be ice barraged by him. Once that happens, attack solus and kill him as he will be fairly easy as an NPC who has no specific combat level. Take his hat after he is dead and savant will then congratulate you.

So long blog, thank you for reading. And great OSRS Gold for sale on RSgoldfast.com, buy now and 24/7 online service.