Priest in Peril reserves a special place in Old School RuneScape. It’s one of the most impactful quests: unlocking over 12 additional quests and an entire game region! Without completing this quest, you will not be able to access Morytania nor Canifis. This quest is officially rated as having a medium length, and technically speaking, has no skill requirements. We’ll go deeper into that in the following sections.

Unusually, there are no prerequisites in terms of completed quests. This makes the quest quite accessible to literally anyone. However, you will need to defeat a combat level 30 enemy: a dog taking the role of a temple guardian. In addition, you are prohibited from using magic against the dog, and the final hit cannot be with a ring of recoil. With that said, you are able to use protection prayers: Protect from Melee is feasible if you have level 43 Prayer.

As for the quest itself, here’s what you’re going to need:

· 50 rune/pure essence - from the Grand Exchange, or mine it after completing Rune Mysteries. Various NPCs in Gielinor also sell both forms of essence. Whenever you need to carry it, it must be in the regular item form: noted form is not acceptable. This means multiple bank journeys.

· A bucket - easily obtainable from any general store.

· (Recommended) Roughly 3 Varrock teleports, in the form of runes or tablets.

· If you have trained Runecrafting - well done! You’re in luck, bring all the pouches you can fill with essence of any kind. This will allow you to reduce the number of trips from Varrock bank to the temple. Bringing Rune pouches merely makes things easier and is optional but highly beneficial. This means you don’t have to worry about training Runecrafting specifically for this quest.

· Combat gear and food. Bring any setup you’re comfortable with but restrict it to Melee and Ranged. 1 Defence pures will have to be able to Protect from Magic and Protect from Melee, both of which are accessible at beyond level 43+ Prayer.

· Energy potions and stamina potions, as you’re going to be running from Varrock to the outskirts numerous times, dependent on how many pouches you have.

To begin the quest, head to Varrock Palace. The first room on the east after entering the palace is the one you want to enter. You’ll see King Roald, speak to him and select the first dialogue option. At this point, you’re going to head to the ‘Temple’ marked on the map, east of Varrock. Ensure you have your combat gear ready to go, as you’re going to face a level 30 enemy. Dependent on your combat level, you may also need food - or perhaps you’re so highly levelled that you don’t even need a weapon. Navigate to the Temple, knock on the door, select the first dialogue option twice. You’ll be told you can’t enter head north and open the trapdoor in the small shed.

At this point, you’ll need to defeat the Temple Guardian. As previously mentioned, Magic will result in no damage being afflicted.  You will be attacked with stab, a melee attack, so Protect from Melee can prevent any damage. It is unlikely you will struggle with this battle as long as you’re properly prepared: the enemy has no special or notable mechanics. One important note whilst fighting: if you die, you will lose every item on you and cannot retrieve them back.

Now head back to Varrock, preferably using a teleport tablet. After using the tablet, head to the Varrock west bank, and withdraw essence. If you’ve got rune pouches, fill them up until you’re carrying 50 essence in total (or as much as you can). If you haven’t got rune pouches, you should carry 25 essence, a Varrock teleportation tablet, and a bucket. Leave 1 free empty inventory space, as you need to carry a key later. Head back to Varrock Palace and talk to the King again. If you have low combat stats and will struggle to defeat a level 30 enemy, replace some essence with food as a backup.

Proceed to head back to the temple after being debriefed by King Roald. You will need the ability to defeat a level 30 mage at this point: you can now use Magic equipment if you wish. To 100% safely fight the mage, you can safespot over the pews or use Protect from Magic. Head inside the temple, and make sure you’re targeting a level 30 Monk of Zamorak, and attack one to obtain a golden key. Targeting a lower level enemy will mean you will not gain the necessary key to progress the quest.

Head to the top floor, and speak to Drezel in the jail cell, selecting the first dialogue option twice. Navigate back to the underground dungeon where you fought the Temple Guardian. In the centre of the dungeon, there are some statues, observe them until you find one displaying a key. Use your golden key from the Monk of Zamorak on the correct statue. Then, use the empty bucket on the well that appears. Head back to Drezel, open his cell, and talk to him. There’s a coffin in the room: use your filled buck on it.

After having depleted your bucket, speak to Drezel once more. Drezel now relocates to the north of the statues you previously observed. Speak to him, and he’ll ask for 50 essence. At this point, you should have at least 25 essence with you, hand it to him. You will need to head back to Varrock (use the teleportation tablet) and withdraw more essence until Drezel receives 50 essence in total. After he does, the quest will proceed to end. 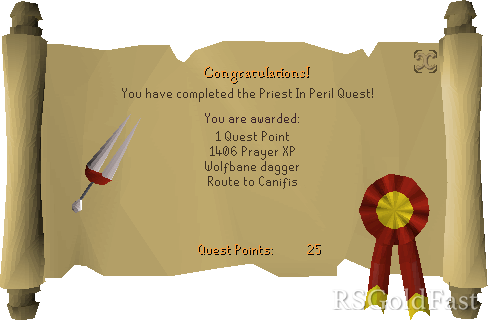 Congratulations, you’ve completed the quest! As aforementioned, you will now gain access to over 12 additional activities and countless activities through the unlocked locations. Canifis, in particular, is fantastic: the Agility course there provides the highest spawn-rate of Marks of Grace.

By the way, osrs gold, rs3 gold, rs07 accounts and other more, RSGOLDFAST offer you so fast, 24/7 online.