A Fremennik series quest where the player must help the chief of a mountain camp to locate his daughter. The quest is about a small tribe that split from the Fremennik in Rellekka a long time ago and decided to start living in the mountains that is just east of the town. They have been living there as nomads for quite some time, but now a tragedy has occurred, the chief’s daughter has gone missing and Needs help. 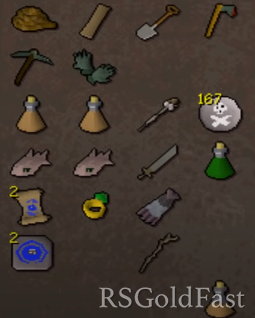 · A Staff or Pole (Can be obtained during the quest. Dramen Staff won’t work)

· A Ring of Duelling

· Enchanted Lyre or Fremennik sea boots for teleportation to Rellekka

· Slayer Ring for closer teleportation to the camp

Enough combat level and good equipment to defeat a level 70 NPC (The Kendal).

To start this quest head to the Mountain camp located just east of Rellekka. You can get there by using an enchanted tyre and then heading north-east, you can also use a fairy ring (a*j*r) to teleport and walk north or simply have a house in Rellekka to teleport to and walk east.

When you’re on the path to the mountain and attempt to climb up the rockslides, a guard will stop you and tell you that you’re not welcome here. At your left, you’ll find another narrow path that will lead you there, so use your rope on the boulder which will have the option “Push Boulder” to climb down. Once you reach, enter the longhouse that is to the east and talk to Hamal the Chieftain. Ask him why everyone in the camp is hostile and he will tell you that the tribes are citizens of Rellekka, but have moved here because of the differences in Fremennik tradition. He will also mention that his daughter is missing and allow you to help him find her, which will now give you access directly from the rockslide where you were once stopped.

Now, head south and take some mud from the bubbling mud pond. If you don’t have a staff, go north of Hamal’s house and pick up a pole. You’ll notice that there are mountain goats just north of his tent, so follow the path west along the lake till you reach a tall tree by the geysers and follow the steps below.

- Climb up, Crawl along the branches, and jump to reach a little island.

- Use your staff or pole on the clump of rocks to vault over them.

- Use the plank to cross the flat stone.

- Select the option “Listen to shining pool” on one of the bubbles that rise from the pool.

You will hear the voice of the chieftain’s daughter, who is long dead. She will ask you to make peace between the tribe and the people of Rellekka, and will also ask you to find a food source for her tribe. So, agree to help her and return to the shore.

You can do both the tasks either together to save time climbing the mountain, or in any order as it doesn’t matter.

Return to the camp to talk to Hamal and ask him about the people of Rellekka. He will tell you about the trader Svidi that they had sent to initiate a trade route, but hasn’t returned yet. Make your way to the rockslide where you were first stopped, climb it and head north-west into the forest. Svidi can be found by looking for a fast-moving yellow dot on the mini-map at the location of the black unicorns, which is between the fence shortcut and the south fence. He must be caught swiftly once spotted. Speak to him and he’ll tell you that he’s afraid that the Fremennik in Rellekka might kill him.

Head to Rellekka, talk to Brundt the Chieftain in the long hall and he’ll give you a safe passage. He will also promise to not hurt Svidi if you agree on retrieving a relic for him, the relic being an ancient rock that the mountain tribe stole from Rellekka ages ago. Return to the mountain camp and speak to Hamal, he’ll refuse to let you have the rock. So, go to the large tent south-west of his tent and use your pickaxe on the ancient rock there to get half a rock. Take it back to Rellekka, so that the chieftain can agree on sharing the rock and give safe passage to the traders. Take the guarantee that was given to you by the chieftain and give it to Svidi, which initiates peace between both the tribes.

Get back to the mountain camp and talk to Hamal, then talk to Jokul, who is located in the tent north of Hamal. Jokul will be looking after his mountain goats, speak to him and he will tell you that he thinks the tribe can survive if a seed of white pearl fruit is planted in this area. Make your way to the white wolf mountain and look for thorny bushes near the glider. You can get there easily if you’ve completed The Grand Tree quest, which will allow you to use the gnome glider. The fastest way is to use the ring of duelling to get to the dual arena and fly to the mountains using the glider. You can also use a teleport to Camelot and walk your way there. Put on your gloves and pick a white peart fruit from the thorny bushes that you find and eat it to obtain a white pearl seed. Now, go back to the mountain camp and give the seed to the chieftain.

Once both the tasks have been completed, head back to the shining pool to talk to Aslief and she will ask you to convince her dad that she is dead. She will also tell you how she died, so leave the island once you’re done and head north of the pool. Keep following the path that goes east into a cave by the dead trees. You can chop down the trees using your axe (hatchet) and keeping doing so until you reach the front of the entrance. Enter it and go to the large cavern, where you’ll find Kendal and numerous corpses near the central pillar. Talk to him and he will tell you that it is the god of the northern lands. Once he’s done bragging, tell him that he looks like a man in a bear suit, which will blow his cover. He will then start by confessing that he has killed Aslief more than ten years ago. Ask him for her remains, and he will refuse to do so as it will affect his identity. Threaten him, and he will start to attack you, where all you have to do is attack him back with protect from melee prayer on. You can also safe-spot him near the pile of skeletons by using ranged or magic, but he isn’t so hard to kill.

Once he’s dead, a bear head mask will appear in your inventory. Now, at the south-eastern corner of the pillars lies Aslief’s corpse, take it and leave the cave. Go back to the mountain chief, show him his daughter’s corpse and tell him everything that had happened. He will ask you to give her a proper burial by building a grave on the island at the centre of the pool, along with some of her possessions. He will also tell you that Ragnar has one of her possessions, and ask you to take it from him. While you’re at it, pick five muddy rocks from the mountain goat pen. Ragnar will give you a necklace which he intended to gift her, so climb the tall tree and make your way back to the small island and bury her corpse there. When you jump onto the island, you’ll automatically reach the burial spot, so just use the muddy rocks on the mould to create a burial cairn. Once all this is over, the quest will be completed.

Rsgoldfast Runescape GUIDES hope you like, thank you for reading. Buy Osrs gold & RS3 gold from here now, get more off & fast service.