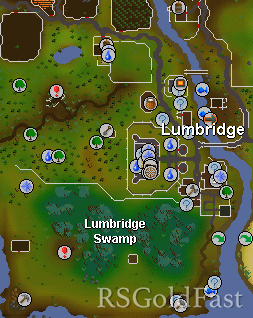 A starting point for the beginners of Runescape who start their journey after completing the tutorial island. The name Lumbridge is famous because of the bridge that is constructed on the River Lum.

This area is also a respawn point for players who die during PVP or while fighting NPCs. However, they respawn point can be changed to other places if the player desires.

The main building in Lumbridge is the castle, which has a player bank on the top floor and is also a starting point for a hand full of in-game quests.

The central area of the town consists of four main places: The Lumbridge Castle, The Saradomin Church, Bob’s Brilliant Axes and The Graveyard.

On the second floor of the castle, you can find Duke Horacio, along with his advisor Sigmund, and a room with a spinning wheel that is used to train the skill crafting. There are two banks in the castle, one on the top floor that is freely accessible to all players, and the other in the cook’s basement if you have started the quest “Recipe for Disaster”. The basement is also an area for low-level players to train as it has level 2 spiders crawling around. It is also an entrance that connects Lumbridge to the Culinoramancer’s Chest and the Dorgesh-Kaan Mine that can be accessed after completing “Recipe of Disaster”.

The Saradomin Church is nothing more than a place to recharge your prayer points and to find the prayer tutor who teaches the basic things you need to know about the skill. The church over 230 years old and is watched by Father Aereck.

A store that is owned by the NPC named bob and has a collection of limited items like Axes, Pickaxes, Battleaxes from bronze to mithril. He is also the only NPC in Lumbridge who you have to visit to repair your Barrows Equipment’s and other axes when broken.

A place that is located south of the church and links the centre of the town with the Lumbridge Swamp. It is an area filled with gravestones and has a coffin in the mausoleum house that plays an important role in the quest “The Restless Ghost”.

The northern area of the town consists of three main places; The Furnace, The General Store and The Sheared Ram.

Even though this area is mostly used because of its agility shortcut from the mine, it is very unpopular as it doesn’t have any bank nearby. However, it is a recommended place if you’re looking to craft amulets, symbols etc. Another drawback would be that the anvil here only smiths’ bronze items and nothing above.

This store sells useful items to players who are new and can use items that can be helpful on their journey ahead. The owner of the store is Donie, and he is assisted by his assistant.

This bar is a starting point for the treasure hunting quest. Players who are looking for guidance relating to their clue scrolls can get help from the NPC named Arthur the Clue Hunter and if you are looking to get on your feet as a new player, you can talk to Adventurer Jon outside the bar. You can also get a beer here, as it is a required item for a couple of quests.

There are five other places surrounding the town; The Goblin House, The Toll Gate, Fred the Farmer’s Farm, Groat’s Farm and The Chicken Coop.

Just crossing the bridge, on the east side, there are a lot of goblins and spiders that can be killed. This area is quite famous for new players to train their levels, as the building here has level 2 goblins for new players and level 5 ones for players with a slightly higher combat level. Another plus point is that new players can fish here at the fishing spots between the house and the river without worrying how far the bank is located.

Just east of the goblin area is the toll gate to the city of Al-Kharid. This gate is what connects both the cities. If you have not completed the quest ‘Prince Ali Rescue”, you’ll have to pay a fee of 10 gold coins to pass through the gate. You can avoid doing that by taking a longer route, passing through the Groat’s farm.

Fred’s farm is famous for two things, first is that it is the best place to shear sheep to obtain wool and spin at the town’s castle, and the second is that you can collect onions here. Another thing to consider is the chickens that can be killed for their meat, feathers and experience in combat training. 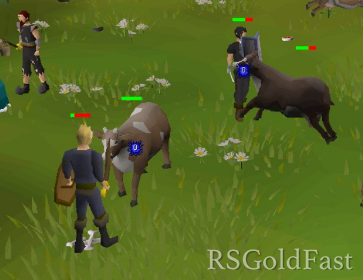 This farm consists of NPCs that can be killed by a low level or new players to train their combat skills. It is filled with cows and calves of level 2 and 5 that drop cowhides to sell, raw beef to cook and bones to bury. There is also a dairy cow that you will have to milk during the quest “Cook’s Assistant”.

Chicken Coop is located just west of the Groat’s Farm and is another great place to train for low level or new players. You can kill chicken here and collect feathers to either sell for gold coins or use to fish via the fly-fishing method.

The following quests can be started by F2P (Free to play) and P2P (Pay to play) players in the town Lumbridge. F2P Quests; Cook’s Assistant, Rune Mysteries, The Restless Ghost, X Marks the Spot and The Sheep Shearer, P2P Quests; Recipe for Disaster and The Lost Tribe