Located southwest of Morytania, the Lair of Tarn Razorlor is a dungeon filled with undead creatures. The zone features a mini-quest where you have to kill Tarn Razorlor.

There’s also an easier way around if you have a Slayer Ring, because that way, you can teleport directly and kill him. The objective is to retrieve a diary that helps enhance Slave Amulets. You can find the amulets in the room next to where he dies.

The path to reach Tarn has several skeletons and traps so a full inventory of Monkfish or better should be fine. You don’t need any special potions for the fight, but carrying a Super Set or Combat Potion can be helpful. If you’re using prayer, then carry two or more Prayer Potions as well. Teleportation means is important because, after the fight, four Terror Dogs will spawn and stop you from leaving. Plus, there’s only one path that can be taken to get out of there.

The easiest and quickest way to get to Tarn is through a Slayer Ring. It teleports you right outside his room. It means you’ll be able to skip through the long path and get straight to the fight.

Alternatively, you can teleport to Canifis, and then go to Burgh de Rott through the Myreque shortcut, or use the minigame teleport to get to Shades of Mort’ton. Between Burgh de Rott and the Haunted Mine, there’s an agility shortcut that you can use. 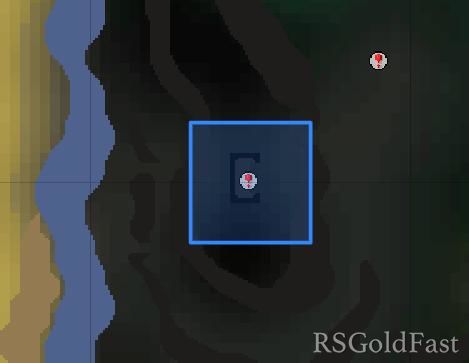 Now, climb over the mine cart that is south of Zealot to enter the Haunted Mine. After that, head north and enter the lair. When you enter it, a short cutscene will trigger showing Mutant Tarn and his two Terror Dogs. 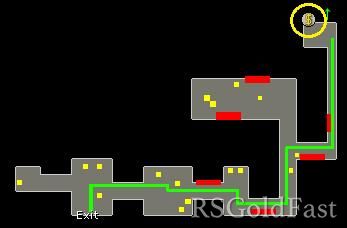 To reach the Banker, you have to head east past the floor traps after entering the lair. The traps are indicated by an ‘X’ on the floor tiles. You need to attack monsters until you reach the end of the passage.

After that, switch to the northern path, and you’ll find a banker with a huge backpack at the end in a small room. It’ll cost you 100 GP every time you use his service. 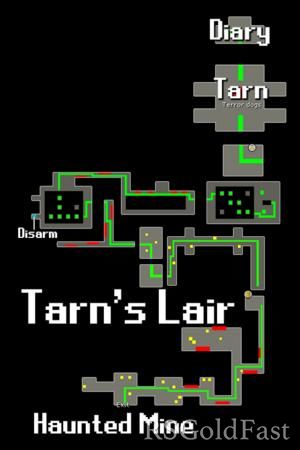 You’ll come across several traps along the way to Tarn, and there are only two ways to disable them. The first is to slowly disarm every trap and the second is to ignore them and deal the damage. Besides that, there are also many monsters wandering around from passage to passage. A good suggestion would be to run past them with Auto Retaliate OFF.

From the bank, head north through the door and get to the end of the U-Shaped passage. Now, enter the southwestern-most door to reach a square room.

Head through the northern door to enter another square room, and then take the western path. You’ll reach a hall that looks in the shape of an inverted T.

Use the north passage and get through the opening on the west side. Do not head to the end of the inverted T-shaped room, or you’ll end up in circles.

You’ll now see a room with pillars that you have to jump on. Head west using the southern pillars to deactivate the Log Trap. A text will appear indicating when it’s safe to cross. Also, the trap resets in about 10 to 15 seconds. So, be quick.

Use the second row of pillars from the west to head north, and then follow the eastern path to reach a room with a big hole in the middle. Move wisely to avoid being knocked out into the hole. 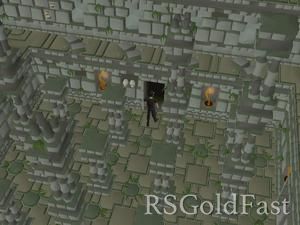 Take the passage on the east wall to reach another room of pillar that you need to jump on to get across. It’s in a zigzag pattern from northwest to southeast. While you cross passage, you’ll be attacked by level-92 Skeleton Mages.

Keep your Protect from Magic activated, cross the passage, and go down the staircase to reach the bottom floor. Finally, take the northern passageway to reach Tarn’s chamber.

First, make sure to check your health, prayer points, and fighting equipment. There won’t be any time to prepare once you enter the chamber. Also, it’s not compulsory to equip a Slave Amulet before or after the fight so you can replace it with something useful.

Besides that, you also need to make sure that you have at least 2 Prayer Potions and 15 pieces of food left. The fight may get intense if you’re of a lower combat level. 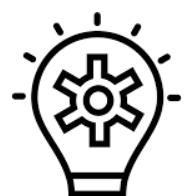 The fight is fairly easy if you have a higher combat level. Tarn can attack with both; melee and magic attack styles. However, it’s mostly melee because even his Terror dogs attack using the same style. So, keep your Protect from Melee active at all times.

You are only required to kill Tarn Razorlor. So, ignore his minions and keep your Auto-Retaliate OFF. Also, regardless of whether you use prayer or not, your points will be drained. A good tip to avoid additional damage is to lure the Terror Dogs behind Tarn.

The instance begins with a cutscene where Tarn transforms into a green mutant with tentacles and unleashes two Terror Dogs (level-110). You’ll also be attacked by Animated Steel Armours (level-53) during the fight. 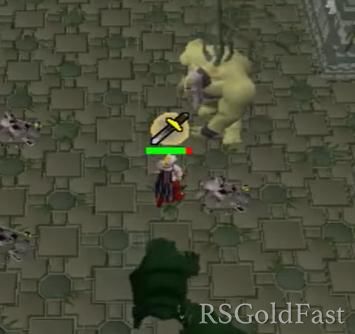 When the cutscene ends, turn your Protect from Melee prayer and start attacking Tarn (level-69). Keep an eye out on your prayer points as well as your health. After you defeat his firm form, he’ll turn into a ghost and the second fight will begin. 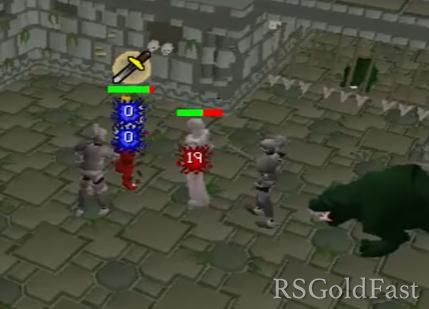 Once you have defeated the ghost form, the northern door will open, and you have to go inside. There will be Tarn’s Diary on the table, which you have to read to complete the mini-quest. 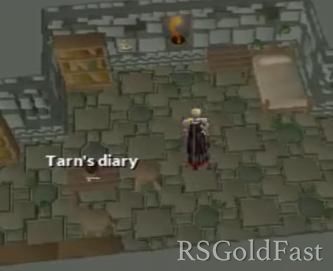 The diary can be used on a Slave Amulet to make a Slave Amulet (e). Please note that there’s a medium Morytania task in which you have to kill a Terror Dog, so you may as well complete that whilst you’re here.

There, RSGoldFast provide the cheapest OSRS gold, RuneScape gold, RS07 fire cape and other products, you can buy them easy & safe all the time. Have a nice day.