In a faraway land, there was a man named Sylas who used to collect mysterious and worthy items that carried a reward for the person who finds them. In this quest, you have to rescue a distressed dwarf from the terrors that are brought by giant beats. So, for this, you’ll have to prepare yourself to start a journey in one of Brother Grimm’s tales.

All the above skills can be boosted to meet the requirements. 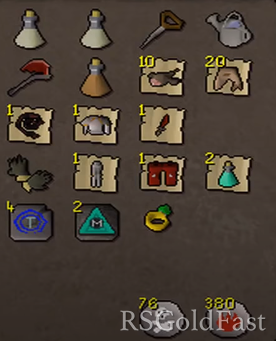 · Watering Can with at least one dose.

· Leather Gloves (Can be obtained during the quest).

· Seed Dibber (Can be obtained from a Leprechaun).

· Teleports to the Mind Altar.

· House Teleports (You’ll need to set your POH to Taverley).

To start this quest, you must first speak with Sylas, who is located in Taverley, just south of the POH (Player-Owned House) portal. You can identify him by his looks; an old man carrying a stick to help him walk. He will ask you to bring him two rare items for his magic beans. The first item is a feather from the Griffin named Grimgnash, who can be found north of the White Wolf Mountain, on the east trail. The second item is a helmet from the dwarf known as Rupert, and he resides in a tower, just southwest of the Mind Altar.

Make your way to the White Wolf Mountain from Taverley, and look for a path that can be seen on the farthest side of the east. Walking along the path, you’ll see two lines, so keep heading up that path to reach Griffin. Speak to him and he’ll tell you that he has a sleeping problem because of the wolves howling all night. He will also threaten you to tell him a bedtime story, and if you don’t do so, he’ll eat you alive. You will need to tell him a story that sounds scary, horrific & violent, so click on the options shown below.

A. I heard you were a great and mighty Griffin! (1st Option)

B. There once was a graveyard filled with undead. (1st Option)

G. For the final point, you can click on any of the options to end the story.

Now, you’ll notice that Grimgnash is asleep, so go next to his nest and steal a feather from it. In any case, if he doesn’t like your story, you’ll deal with 10 to 20 damage and you’ll have to start again, so be careful if your hit points are low, then you can end up dead.

You can find Rupert the Beard in the tower that is situated between the Ice Mountain and the Goblin Village. You can fast travel there using a Mind Altar teleport (Runes or Tablets) and then run south to reach the tower. 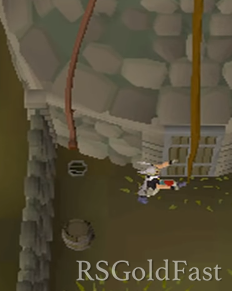 You cannot enter from the main entrance as a princess will stop you, so go around the back of the tower and climb the crumbling wall, which requires 58 Thieving. Now, click on the drainpipe to talk to the dwarf that is imprisoned. You’ll talk to him twice to figure out a way to reach the top of the tower. He will suggest you climb up to see if there’s anything necessary that can help, and then he’ll throw down his beard for you to climb it. He will mention how the princess stole his armour before locking him away, and that he cannot give you his helmet because he doesn’t have it.

So, you’ll have to now talk to the Princess named Miazrqa, who can be found in the north section of the tower. Climb down and climb back over the east wall to talk to her. She’ll agree on releasing the dwarf in return for her stolen pendant. The pendant was stolen by a mouse in her cousin’s house. Ask her for the house key or simply look under the plant pot kept left of the front door.

Enter the house and go to the piano room in the basement, where you’ll have to play it using the notes “EFEDCAEGA”. The first five alphabets can be found on the right side of the piano, and the rest on the left side. If you’re counting the keys from right to left, then click them in the following order: key 5, key 4, key 5, key 6, and then key 7, key 9, key 12, key 10, key 9. This will result in the compartment opening, and you’ll find a Shrinking Recipe, a To-do List, and two Shrunk Ogleroots. So, read the recipe, and then use Ogleroots on the Tarromin Potions (UNF) to make two shrinking potions. Go to the southern-most room on the ground floor to find the mouse hole, and drink one of the potions to shrink yourself.

Upon entering the hole, turn your ‘Protect from Melee’ prayer on, as it can be helpful against level 95 creatures constantly attacking you. Climb the nail walls that are on the eastern wall, just south of the grate and continue your way west. Climb the two set of nails that you find, go north-east and then climb down the nails. Now, go north to climb the final set of nails, and then take the pendant. Make your way back to the tower and hand the pendant over to the princess to free the dwarf. In return for freeing him, he’ll give you his helmet, so go back to Sylas both the items that you have successfully obtained and he’ll give you the magical beans.

Go to the southeast farming patches in Taverley and plant them in the tree patch using a seed dibber and a watering can. If you don’t have one, you can buy it off the Tool Leprechaun or a Farming Store. Once a giant beanstalk grows, get ready for the final battle.

Once you’re ready with your equipment for the fight, climb up the beanstalk to find a cloud giant named Glod. At first, he’ll have a combat level of 118, but shortly during the battle, it increases to 138. Ranged is a better option to use against him if your melee stats are low, as Ranged is also his weakness, or you can use Magic too. Also, you cannot poison him because he’s immune to it.

Use Ranged or Magic making use of a nearby wall, and be careful of his taunts, because it will result in your character attacking him head-on. When this happens, run back behind the wall and continue the same. Glod can easily hit 24s, so remember to always keep your health full. Once he’s defeated, pick up the Golden Goblin that he’ll drop and take to it Sylas. He will then ask you to chop down the beanstalk, so use a shrinking potion on it and chop it off using your axe. After that, go back to Sylas to complete the quest and obtain your reward!

RSGoldFast OSRS Gold, osrs fire cape service so great, buy now and get what you want.