In this guide, we will explore how you can successfully defeat the Giant Mole boss in Old School RuneScape. The Giant Mole is a fantastic boss for mid-level players or anyone getting introduced to the world of bossing. Whilst this boss can be quite difficult to tackle, as long as you’re able to persist you should be able to conquer it within no time!

Killing this boss is an excellent source for elite Clue scrolls. It also can easily provide you with a lucrative money-making method of 1+ million gold per hour, contingent on fluctuating market rates. Additionally, if you wish to complete the Falador hard diary, gaining at least one kill is required as the third requirement. Most of all, the Giant Mole is known for dropping a high number of bird nests, which can contain expensive seeds. Bird nests are also a primary ingredient to compose a Saradomin brew, which are consumed heavily in bossing.

Learning to defeat this boss will be hugely beneficial in your Slayer levelling journey as well: given it provides 215 experience per kill. Without further ado, information regarding the prerequisites for tackling this boss is next up.

It is recommended that you have base 70 stats in all main combat skills (Strength, Attack, and Defence), alongside at least level 43 Prayer for protection prayers. Alternatively, you can safespot the Giant Mole from the walls of the cavern, as the Giant Mole will not attack you. If you opt with the latter method, essentially any level is suitable, however, you can expect much longer kill times. Three methods using different setups will be offered below: Dharok’s, Void, and Ranged.

To enter the underground cavern, you must have a Spade. This is easily obtained from a General Store or the Grand Exchange, so is by far the least of your worries.

If you’ve ever gone underground in RuneScape before, in a place that isn’t well-lit, you’ll be familiar with a black screen and being attacked by invisible bugs that you can’t defend against. Thus, you will need a light source at all times with you. Whilst you can bring a candle, it is the weakest light source. In the course of either time or combat, a candle can extinguish and you need a tinderbox to ignite it again. If you complete the quest Making Friends with my Arm, you can light the cavern permanently by building the Fire of Eternal Light. Alternatively, you can use Kandarin headgear (complete the Kandarin Easy Diary), Firemaking cape, or a Bullseye lantern (purchasable for 600 coins). 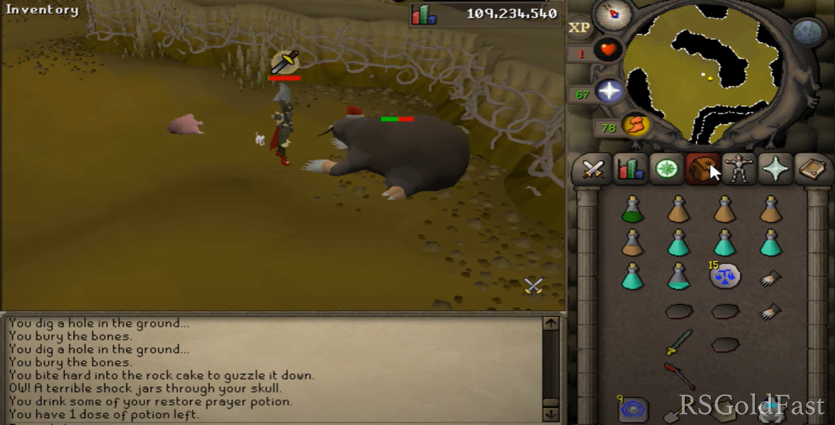 The Giant Mole has no unique combat abilities nor any special attacks and is very predictable. It will attack you using crush and is immune against venom but can be poisoned. It is particularly vulnerable against Ranged.

When it attacks, it can deal up to 21 hitpoints of damage in a single hit. However, once the boss is at less than 50% of health, it has a one in four chance per each attack to dig into the ground. Once it does this, you’ll have to explore the cavern and relocate the Giant Mole. This can take quite a significant amount of time: it is best to complete the Falador hard diary for the ability to gain a locator. In addition, by completing the Falador hard diary, you will receive noted mole claws and noted mole skins - this allows you to prolong your trips. 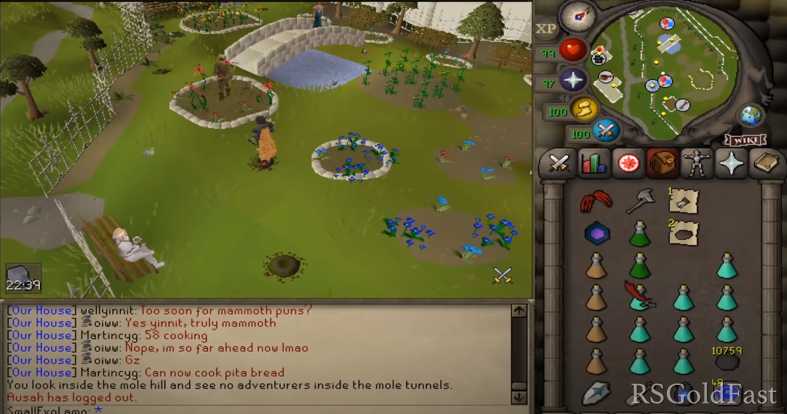 Regardless of which method you choose, your inventory setup should consist of something like the following:

● 13 Prayer potions (unless you are safespotting).

● 5 Stamina potions (for when the Mole burrows away)

● Some form of quick-teleport: such as Ring of wealth/Amulet of Glory.

The Giant Mole can be reached by digging at the following location, at Falador Park.

Dharok the Wretched equipment works by providing a special bonus. For every 1 hitpoint you have lost, your following hit is 1% higher. Hence, you should use a Dwarven rock cake to reduce your HP to 1, to maximize your hit. This may seem counterintuitive, but as long as you use Protect from Melee, you do not need any food. You can only be attacked through a melee attack by the Giant Mole.

To further speed up your kills, you can consider using Piety and Rigour. You should leave the cave if your inventory is maximized or you’re running low on prayer potions, as you risk death in this case.

This method actually supersedes the Dharok method, as long as you are using a Twisted Bow. Whilst the Giant Mole has a slightly higher vulnerability to Ranged, you must also counter the bonus that Dharok gear affords you. The Twisted Bow is known to sell for over 1 billion GP; hence it may not be an affordable option.

You can also negate the need for Prayer potions by safespotting. If you are safespotting, you will have to stick to the cavern walls and expect slower kills. You can speed up kills by using Eagle Eye. Safespotting isn’t recommended in contrast to using Dharok’s or even just Void.

Dharok’s gear can be slightly expensive, so you can use alternative gear such as Proselyte to maximise your Prayer bonus. This will result in slower kills compared to the Dharok method, but still definite kills.

If you’re a Hardcore Ironman, you may not want to risk being 1 HP in case of slipping up by not paying attention. You can also consider using Void/Elite Void equipment. Additionally, one can actually achieve a similar kill count to Dharok’s if you pair the gear with a Ghrazi rapier. The Ghrazi rapier is another expensive item that retails at 100+ million gold osrs.

Hopefully, this guide has been useful to you! Feel free to experiment with different methods and see which one is most suitable for your playstyle.