A ghost port called Port Phasmatys located east of Canifis is full of ghosts who are stuck in RuneScape and aren’t happy with that. You will need to help them pass onto the afterlife. 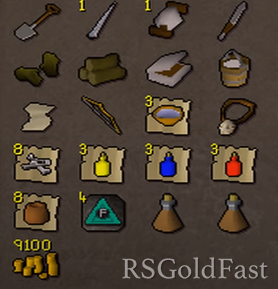 · 58 Agility to save time at the Ectofuntus

Enough of a combat level to defeat a level 32 NPC (Giant Lobster).

You can start the quest by talking to Velorina located in the north-eastern section of Port Phasmatys. But to enter the area, you will need to pay a fee of 2 ecto-tokens and to finish this quest, a total number of 35 tokens is recommended. These tokens can be obtained by worshipping at the Ecotofuntus located north of the north entrance, with 7 bones, 7 empty pots and 7 empty buckets in your inventory. Do remember that you’ll need a ghost-speak amulet equipped to claim the tokens.

Enter the port by paying 2 ecto-tokens at the energy barrier and make your way east to talk to Velorina. She will tell you the whole history of the ghosts of Port Phasmatys and will ask you to talk to Necrovarus who can be found in the Ectofuntus temple located outside of the town’s walls. Necrovarus will become furious when you approach him and he will refuse to listen to you. So, go back to Velorina and she will mention an alternate approach by speaking to an old friend. When you ask her where he can be found, she’ll tell you about her recent vision about a small wooden shack in Morytania, with a sea close and castles looming beside it.

For this part, you’ll need nettle tea, so if you don’t already have it, then take a bowl of water and go west outside the barrier, towards Canifis till you reach a slayer master named Mazchna. Just east of him will be a field of nettles, wear your gloves and pick some, then use the nettles on the bowl of water. Light a fire with your tinderbox and boil to bowl to obtain nettle tea. Once you have the item, continue your journey north-west from the slayer master, right into the Old Crone’s house. Speak to the old crone and she will give you her special cup to pour some nettle tea into. Speak to her again and she will refuse to drink it without milk added, so add a bucket of milk into it and hand it to her so that she can remember her being a disciple of Necrovarus. She will mention that if the ghost-speak amulet is enchanted, then it will have the power to command the ghosts and with one charge, it will help you control Necrovarus and let the ghosts pass through.

To perform the enchantment, you will a magical robe from Necrovarus, a book of rituals called Haricanto, and a book to translate the words. Speak to her again to know about her runaway run and she will give you a model ship to hand over to him. Fix the ship using silk, thread, needle and a knife. Now, go east towards the port, and then north of the farming patches before the undead cows and chickens to find a ship. Climb onto the deck, go east and climb the ladder outside the room to reach the quarterdeck of the ship. Wait for the wind speed to go low and search the deck to know which colour flag has been compromised. You will need to check the mast 3 times to know all the 3 different colours, and then dye the model ship accordingly. Red & Yellow will give you orange, Red & Blue will give you purple, and Blue & Yellow will give you green. Climb down the ladder to talk to the old man, and give him the model ship to obtain a chest key.

Use the key on the chest in the captain’s quarter to get the first map scrap. Go to the north-west section of the deck and jump along the path of rocks to reach the other end, where you’ll find a chest containing the second map scrap. Now, climb down the ship’s ladder and attempt to open the chest there, where you’ll get attacked by a giant lobster. Kill it and search the chest again to get the final piece. Use the pieces on each other to get a treasure map to find the spot where the treasure is buried. Go back to the port, grab a spade, and head north-east to the dock and ask the ghost captain to take you to the Dragon tooth island. Pay a fee of 25 ecto-tokens and go to the following location as shown in the picture. Following the maps instruction will help you reach west of the Saradomin statue, and from there walk 6 steps south, 8 steps east, 2 steps north, 4 steps east, 22 steps south, and dig to obtain the book of Haricanto.

Now you’ll need a translation book, so travel back to Port Phasmatys and grab 400 coins and an oak longbow. Go north from the bank, onto the docks (east of the pub) and speak to Ak-Haranu, who is a trader from the east. He will trade you the book in exchange for Robin’s signature on an oak longbow, so go to the pub nearby to find Robin and he will challenge you to a game of rune-draw. Beat him a couple to times until he owes you and he will give you his signature as a payment of his debt. Take the bow back to Ak-Haranu to receive the manual.

Go back to the pub where Robin was and talk to the ghost innkeeper and he will give you a job to hand bedsheets over to robin. Do not hand him over, instead keep it for yourself to disguise as a ghost. Now, you will need a bucket of slime to dip the sheets in, so either trade it from one of the crewmembers on the east docks or buy an empty bucket and fill it from the slime pool. Once you’ve dipped the sheets in, head to the town square, and talk to Gravingas. He is a protester and will ask you to partake in it while handing you a form to collect the townsfolk’s signatures. Put your dipped in slime bedsheet on, gather 10 signature and speak to Gravingas again. He will ask you to show the petition to Necrovarus, who will then pretend to under the towns need and drop a bone key while raging out. Pick the key, go upstairs and open the door to enter his room. Search his coffin, grab his robes and head back downstairs.

Now that you have all the items to complete the enchantment. Go to the old crone and hand her everything, including your ghost speak amulet to perform the ritual. Once you have the enchanted amulet, go to Necrovarus and command him to let all the ghosts pass through. A cutscene will begin and once it’s over, speak to Velorina to complete the quest.

Rsgoldfast offer you the best Runescape guides & Osrs gold & Other service, hope you love us, have a good time.