In this quest, you’ll have to talk to the NPC ‘Cook’ to learn how to make a crème brulee supreme for Sir Amik Varze as he requires it. 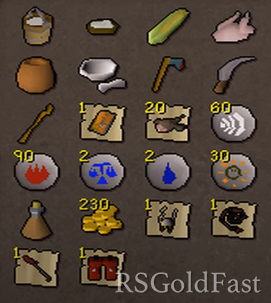 · A bucket of milk (Purchased from the Culinaromancer's Chest)

· A pot of cream (Purchased from the Culinaromancer's Chest)

· A Dramen branch to make cinnamon

· A Pestle and Mortar

· The player has to visit Entrana

· Dramen Branch should be collected beforehand

To start this quest first inspect Sir Amik after you’ve started the Legends’ Quest and then talk to the Cook in Lumbridge Castle. He will tell you that the ingredients and process to make Crème Brulee Supreme are as follows;

2. Add a pot of cornflour

4. An egg of an evil chicken

5. Cinnamon made by crushing a dramen branch

To get the final result, you have to flambe somehow using a dragon’s breath.

Pot of cornflour can be made by grinding raw sweetcorn in a windmill and by using a pot to fill the flour with.

To obtain the vanilla pod, you’ll have to head south-west in the Kharazi jungle and look for vanilla plants near the coastline. The jungle is located on the southern part of Karamja and can be easily reached using the fairy ring (c*k*r). You have to be sure to bring your Radimus notes if you haven’t completed ‘Legends’ Quest’ and to enter the dungeon, you’ll need to cut through the deep trees and branches with the help of a machete.

The ingredients can be gathered in any order, but while mixing you should follow the above steps. Also, to inquire the whereabouts of the evil chicken, you’ll have to first talk to the Cook about freeing Sir Amik.

If you start the swan song quest before completing the sub-quest, the wise old man will not have a dialogue option about the evil chicken and he’ll only talk to you about the runes that you have to bring. So, if you have started the quest, it is recommended that you complete up to the ‘Repairing a colony’ part before continuing.

For the evil chicken’s egg, head to the draynor village and talk to the wise old man. Choose the fourth option and he will tell you about strange beasts. He will talk about the foul bird and ask you to look for it in the fairyland. Make your way to the shed in Lumbrdige Swamp with a dramen/lunar staff equipped to get to Zanaris. Use the raw chicken in your inventory on the chicken shrine to be teleported into the evil chicken’s lair. The shrine is just north-east of the main fairy ring after you enter the shed.

Now, head past the black dragons toward the evil chicken whose combat level should be around 77 and does not really pose much of a threat to players with mid-combat level or higher. Kill the chicken and pick the egg so that you can add it to your Brulee. While leaving the area, you can also defeat a black dragon on your way and pick the token. However, you should not rub the token yet.

For the cinnamon, you’ll need a dramen branch from the dungeon under Entrana. To cut down the branch, you’ll need a hatchet which can be obtained as a drop from the zombies inside the dungeon. To void getting into a fight with demons, wait for them to move to the opposite direction, head towards the tree and cut off the branch. While leaving, you will notice a magical door on your right that can be opened to teleport back to the altar in Draynor.

Restock your supplies at the bank of Zanaris, and head back to the dungeon using the chicken shrine to kill a black dragon (if you haven’t already). Make sure that you pick the token that is dropped before leaving the dungeon. For the final part, equip your anti-fire shield or just take a dose of anti-fire potion and rub the token while standing inside Zanaris / Lumbridge. You can avoid damage from the fairy dragon by equipping ice gloves.

When the fairy dragon appears, request him to flambe your Brulee so that it can be turned into a crème Brulee supreme. Be careful while choosing the correct option while speaking to the fairy dragon, or else it will result in losing your token. If you choose “Could I just keep your token for when I really need it, please?” will result in you being teleported back to the location where you last rubbed the token. Once the Brulee is finished, head back to the castle and use the item on Sir Amik Varze to protect him and reach the end of the quest.

- Access to the Evil Chicken's Lair, where you can fight Black Dragons (the fowl beast himself has moved on to other things.)

Hope this runescape guide can help you. RuneScape gold for sale on our site all the time, cheap & fast & 24/7 online.