Auguste, a lone monk is tired of the simplicity that his life offers. He wants his name to be written on books, about how a man bent the laws of physics and sailed through the air. However, to do this he will need the assistance of an adventurer. Will you be able to help him on his journey to becoming a legend?

The above skills can be boosted. 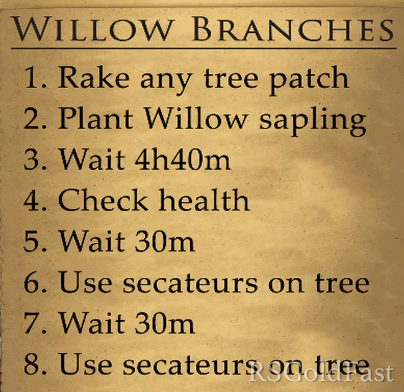 - 12 Un-noted Willow Branches (Can be bought from the Grand Exchange or can be obtained from Willow Sapling. However, you will have to wait for 5 hours for It to grow).

- Amulet of Glory (To get to Draynor Village)

- Cabbage Teleport via Explorer’s Ring (To get to Port Sarim) 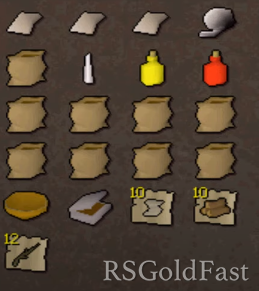 Before you start the quest, make sure that you have all the required items to minimize bank runs. Secateurs, rakes and spades to grow a willow sapling can be obtained from a Tool Leprechaun. However, you will have to wait for a few hours, which can be time-consuming. You can get the following items during the quest: Papyrus (3), Ball of Wool, Red & Yellow Dye, Empty Sacks (8), Empty Bowl, Sack of Potatoes, Silk (8) and a Candle. So, all you need to bring on your own is Willow Branches (12), a Tinderbox and Normal Logs (10) to complete the quest.

Now, to start the quest, you must first speak to Auguste who is located on the west part of the island, Entrana. Do not carry armour or weapons along with you, as they’re on allowed on the island.

He will ask you to help him make two test balloons and he will tell you to bring the following items:

2. A Candle, which can be bought from the candle shop at Tai Bwo Wanna or Shilo Village, or you can steal one from the church at Entrana.

3. A Ball of Wool, which can either be spun from wool that is sheared from a sheep or it can be bought from the shop in the city of Ardougne. 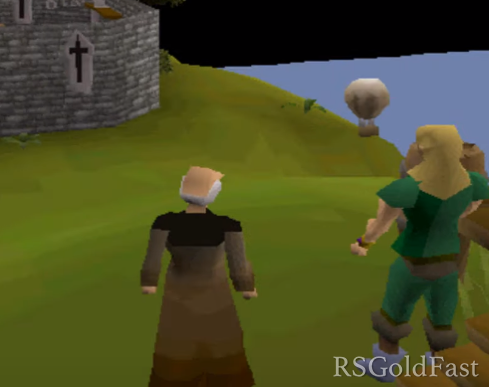 Once you have all the items, speak to Auguste again and he’ll tell you that he needs to make a model of the air balloon. So, use the papyrus in your inventory with the ball of wool, and then use an unlit candle to make an origami balloon. Do not attempt to light the model or you will have to collect the items again and make another one. Speak to him again, and a short cutscene will begin where he launches a test run for the balloon model. Once it’s over, he will take the remaining items from your inventory and a second cutscene will begin. In this cutscene, he launches another test run and an angry mod of peasants’ attack to destroy it.

Now, Auguste will ask you to bring him items to make a real balloon, so you will need the following:

1. Yellow Dye, which can be obtained from Aggie at the Draynor Village in exchange for two onions and 5 coins, or from Lletya at the seamstress shop.

2. Red Dye, which can also be obtained from Aggie, but for three redberries and 5 coins, or it can be bought from Lletya.

5. 8 Sandbags, which can be made by using an empty sack on a sandpit.

6. 12 Willow Branches, which can be bought from the Grand Exchange, or it can be grown yourself using a Willow Sapling. 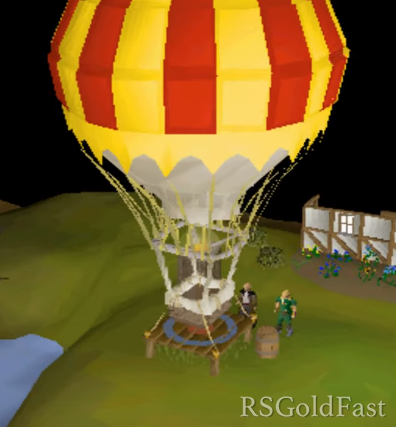 Once you have all the materials in your inventory, speak to Auguste and make sure that you have Normal Logs and a Tinderbox too, as you’ll need them for the flight. He’ll give you a little information and a few tips that will be useful to you. Now, an interface to control the air balloon will begin, so make sure that you safely avoid the obstacles and land at the marked spot.

The fuel is limited and can be brought to notice through the numbers that are listed beside the sack and log buttons. However, if the fuel does run out, you can use the relax button to advance. In any case, if you crash, simply log out and log back in to retry, also don’t forget to bring 10 Normal Logs with you again.

When you start flying, you’ll be shown three different paths to Taverley on the balloons interface. If you fly past the landing part, you’ll be blown away with the balloon, and if you bring the balloon in contact with the space of the landing pad, you’ll be smashed to the ground. There are three paths that you have to cross to safely land on the marked spot:

Once you’ve safely landed the air balloon, speak to Auguste and the quest will be completed!

This guide useful? Thank you for reading. And buy osrs account & osrs gold from us, make you better in-game. Good luck.