Enakhra's Lament is a very enjoyable, but challenging, Old School RuneScape quest. The quest dives into the history of RuneScape so it has plenty of information packed in for you to consume. In this guide, we’ll inform you of the best way of completing the quest, just in case you’re stuck at any point.

Unlike many other quests within the game, there are no enemies to defeat! So, you can sit back and relax for a more casual quest compared to most others in the game.

Even if you’re not an Ironman, bringing your Rune pickaxe with you could be a fantastic idea. The reason being is that mining granite, which requires level 45 Mining, is a Hard Desert task. Your future self will thank the old-you for having one less task to do when you do eventually do the diary! As you know, diaries offer rewards that are extremely valuable generally, and those who love completion also love doing diaries.

Here are the items you’ll want:

· The best pickaxe you have access to. However, you can gain one from the quest. As there’s no combat involved, you can equip the pickaxe in your weapon-slot.

· Lightweight/weight-reducing gear, in combination with stamina potions. Don’t worry about food or combat gear for a quest that has no enemies to defeat.

· Desert robes and waterskins mean you will not lose hit points whilst in the desert.

· 1000 coins for carpet rides if you do not have access to fairy rings.

· You need one piece of bread or cake.

· A candle (cannot be a black candle)

· You will need a small number of runes to cast Fire and Wind spells. The acceptable spells are bolt, blast, and wave - pick whichever you’d like.

· You will want 2 x 5kg pieces of granite, and 52kg of sandstone. However, you can mine these during the quest itself, unless you do not have at least level 45 Mining. 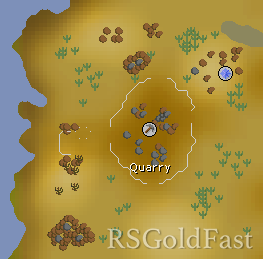 To start with, you need to head to the quarry. The best way is using fairy-ring code BIQ, or a magic carpet ride to Bedabin Camp, which you can charter south of Al Kharid.

At the north-east of the quarry, you’ll see a bald figure wielding a stick named Lazim. Speak to him, using the first dialogue option followed by the second. Provide him with 32 kg of sandstone: this doesn’t have to be done in one go. Any large pieces you’re carrying can be broken down (to smaller pieces) using a chisel. The sandstone mine is located next to Lazim.

Proceed to place the base on the flat ground. You then want 20kg of sandstone for the base’s body. Use your chisel on the statue and speak to Lazim. You have the choice between three heads: the choice doesn’t actually matter; however, you do need to remember which one you picked.

You then need to collect two pieces of 5kg of granite. Even if you purchased the pieces from the Grand Exchange, it is worth mining just for the diary 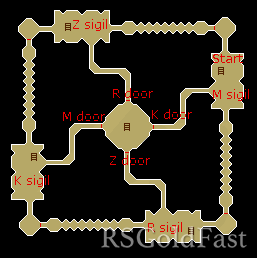 task completion. With one of the pieces, chisel the head that you previously chose onto the statue. If you choose inconsistently from your previous choice, you will need to repeat making the head. Speak to Lazim once more. Head down the ladder and speak to Lazim again. There’ll be a cutscene sequence that you’ll have to watch.

Use your chisel on the fallen statue exactly four times. You’ll receive all the limbs, and just outside each hallway, pick up the R, K, Z sigils. South of Lazim, you’ll see the M sigil on a pedestal. By attempting to open each door, you will automatically place the sigils, as long as you complete all the dialogues. Once you’ve placed all four sigils, climb up the ladder.

Use the soft clay on the pedestal, and chisel on the 5kg granite you saved from before. Place the newly created stone head on the pedestal and follow the dialogue through to completion. You now have some puzzles to solve, and here are the solutions:

· North-west, the food item you previously brought should be used on Pentyn.

· North-east, cast your wind-based spell on the furnace.

· South-east, you need to light all six braziers. The items are the logs, coal, and the candle you brought. You’ll know which one to use by using the investigate option. Do not stand in the room idly, as you will receive damage if you stand in the room without lighting anything.

· South-west cast your fire spell against the fountain.

The magical barrier will now allow you to pass-through. Head up the ladder. On this floor, cast the crumble undead spell on the boneguard. You should be successful from your first cast; however, the guide has recommended you bring in enough runes for 5 casts, due to the possibility of splashing. No player wants to travel back to the Grand Exchange midway through just to gather more runes! 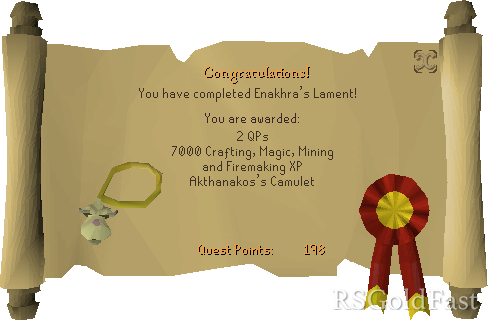 The rewards are quite nice. You’ll receive 7,000 experience in Crafting, Firemaking, Mining, and Magic! Alongside 2 quest points, you also receive the Camulet, which allows you to talk to camels, and teleport back to the temple. The Camulet only has 4 teleport charges but can be recharged using camel dung. Alternatively, by speaking to Lazim, for 1 million GP, he can charge the Camulet with unlimited charges.

By completing this quest, you’ve also completed a medium diary task for the Desert Diary. The Desert amulet 4 is particularly cool: allowing 100% protection against desert heat. That means you no longer need any robes or waterskins! Quests and diaries can be of immense help to you just through the rewards they successively unlock for you.

Thank you for reading. RSgoldfast store offer you the best OSRS Gold all the time, safe & fast, enjoy here.