The following quest is a part of the Troll quest series, and it centres around a single item that needs to be located and obtained so that the druids can continue with their efforts in reclaiming the Stone Circle. For this part, Sanfew will require a rare herb to perform a purifying ritual. Thus, causing you to travel back to the Troll Stronghold and finding it. 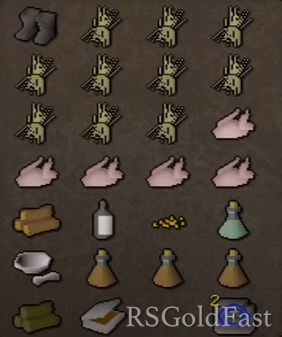 To proceed with this quest, you will need to have completed; Druidic Ritual, Troll Stronghold, and Death Plateau, and you will need at least level 31 in the Herblore skill. Other than that, you are required to bring along the following items – Climbing Boots, Vodka, Pineapple Chunks, 3 Normal Logs, 10 Grain Bags, 5 Raw Chickens, Tinderbox, Pestle & Mortar, and Ranarr Potion (UNF).

It is also recommended that you bring along items, such as Ardougne Necklace, Games Necklace/Combat Bracelet, Slayer ring, Dramen Staff, Food & Armour, Energy/Stamina Potions, Falador/House Teleportation Tablets, and Prayer/Super Restore Potions, and at least have 44 Agility to avoid the rock-throwing trolls. 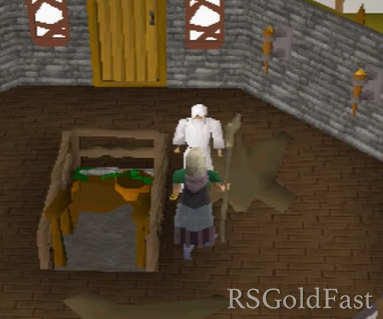 You can start the quest by speaking to Sanfew, who is located on the top-most floor of the Taverley Herb Store. He will ask you to locate the herb called Goutweed so that he can perform the next part of the ritual that is related to the Druid’s Circle. However, only the Trolls of the Troll Stronghold know about the Goutweed, and that’s why Sanfew will suggest you speak to Eadgar, who is located at the very top of Trollheim. 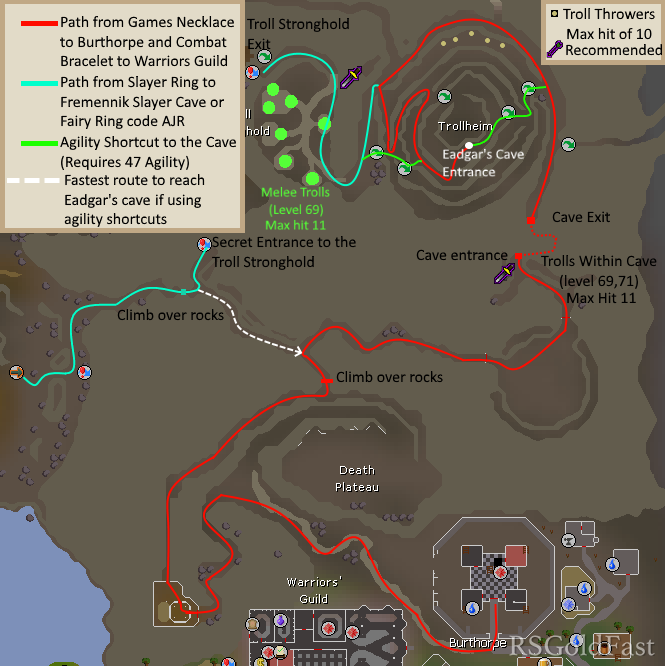 You can reach Trollheim by using a Games Necklace or Combat Bracelet to teleport to the Burthorpe Games Room or Warriors’ Guild, respectively, and then walking the north-western path. From there, you will have to change your direction south when you reach the fork (in the path to Tenzing’s house). If you don’t have Climbing Boots, you can purchase a pair from Tenzing for 12 GP. Now, wear the boots and climb over the stile that is located in his backyard, and then keep following the path north. When the next junction arrives, climb over the rocks while following the path, and then head east towards the next fork to perform the same (rock climbing).

Quickly walk past the NPC named Dad, and then use the norther exit gate to follow the west and north path. You will now need to go into the Cave Entrance, where trolls will be aggressive towards you, and they’ll use melee attacks, which can deal up to 12 damage. So, use Protect from Melee Prayer to minimize the incoming damage. Keep following the cave round, and then use the exit at the end to reach the base of Trollheim (east side).

If you’re using the Slayer Ring path, then you will need to teleport to the Fremennik Slayer dungeon or use the Fairy Ring (Code: A*J*R) to reach outside the entrance of the dungeon. From there, you have to head northeast to pass through a narrow passage, and then climb over the rocks using your Rock Climbing Boots. Now, if you have enough Agility level, then continue the path east and follow the Burthorpe route to reach the cave, and if you don’t, then go north towards the Secret Entrance. This will take you to the lower levels of Troll Stronghold, after which, you will need to go north along the corridor passage. Quickly go past the jail cells and guards (who are sleeping) to reach a stone staircase that is on the north-eastern corner. Now, open the door and climb up to teach the upper-most levels of the stronghold, and from there, head south through the corridors until you see the exit, which is on the east wall. Finally, exit the stronghold and keep your direction southeast to reach the base of Trollheim (west side).

Whichever path you choose to reach the base, climb to the very top of Trollheim, and if you’re walking from the east side, then keep your Protect from Missiles Prayer actives because you have to run past the rock throwers. Choose this path, if you don’t have 44 – 47 Agility, and if you do, you can use the Agility shortcut to quickly climb at the top. Once you’re there, you will notice an unmarked cave entrance, which is on the southern side. Enter it and speak to Edgar there about the Goutweed Herb, and he’ll suggest that you have a word with the Troll Cook.

Time to leave Edgar’s Cave and go back down the hill. Once you’re down, go southwest to follow the path into the Troll Stronghold. Once again use Protect from Melee Prayer, because the level 67 Trolls can cause up to 11 damage. After entering the stronghold, make your way south and then down the staircase to find four Troll Cooks. One of the cooks will be named Burntmeat, who provide you with the information about Goutweed in exchange for a human being. So, go back to Edgar now and update him on the presented offer.

Edgar will ask you to bring a parrot so that he can fool the Trolls into believing that it is a human. You will now need to visit the Ardougne Zoo and speak to the NPC named Parroty Pete, who is located on the northern side of the zoo. He will tell you that their favourite food is Pineapple Chunks (after you speak to him about both the given options) and that they get easily drunk after having Vodka. If you have both the items in the inventory already, then use them on one another to make Alco-Chunks. You need to use this item on the Aviary Hatch, located on the west side of the cage. Once you do that, you will receive a Drunk Parrot, after which, you need to tell Parroty Pete that you will take it to the vet for a check-up.

Go back to Edgar using your preferred route, and speak to him about the next step –

· Talk like a human: Head back to the Troll Stronghold, and go north, then climb down the stone staircase, and unlock the prison door. Climb down the second staircase to reach the prison cells, and go west to hide your parrot under the northern rack of the cells. Leave it there for now, because you will come back for it later.

· Smell like a human: Make your way to Taverley to notice the NPC named Tegid washing robes in the lake. Speak to him and ask for a Dirty Robe, and he’ll decline. Now, threaten him by choosing the option ‘talking with Sanfew’ or ‘chopping down the trees, which will trigger the event and you’ll receive the robes.

Once you have all the items, take them to Edgar and he’ll ask you to make a Troll Truth Potion so that Burntmeat doesn’t lie to you about the Goutweed. Nearby Edgar’s hill, you will find a tiny Thistle growing in one of the patches, so pick it up and ignite the logs to start a fire. Cook the item to obtain Dried Thistle, and then grind it using a Pestle & Mortar to create Ground Thistle. Finally, add the product to your UNF Ranarr Potion to make a Troll Truth Potion. Speak to Edgar again, and he’ll take the potion from you and tell you to bring the parrot. So, go back to the prison cells and search the racks to retrieve the parrot.

Give the parrot to Edgar and he will give you a Fake man, which needs to be taken to the cook named Burntmeat. As a reward for bringing a human being, he will reward you with Burnt Meat and also tell you the location of Goutweed. You can find Goutweed in the storeroom, which can be accessed using a key that can be obtained by searching the Kitchen Drawers.

To the south-eastern corner of the room, you will find drawers – search them to obtain the Storeroom Key, and then down the northern staircase to get to the next part of the quest, where you have to sneak past the guards. If you are seen by any one of them, they will start throwing rocks at you that can deal up to 1-6 damage, and you’ll also be thrown back at the entrance. 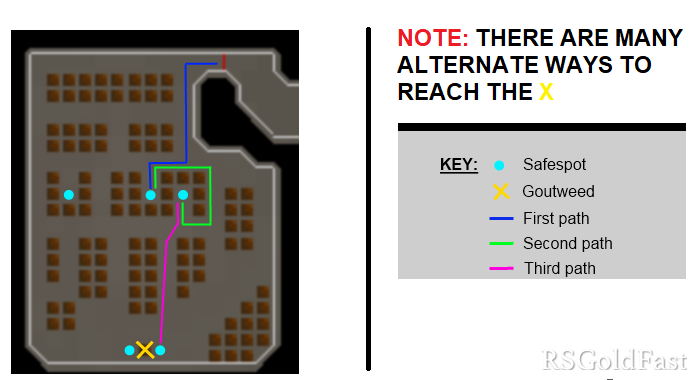 The best strategy is to use the two eastern-most guards as indicators, which will allow you to indicate when to move towards the second safe spot. First, activate your run and wait until one of the two guards rounds the boxes on the northern corner. Once that happens, move to the second safe spot, after which, you will have to wait for the guard that comes closest to you (north) to turn towards the west direction, and then you can directly run to the safe spot adjacent to the crate you’re at. Once you’re there, click on the Goutweed create to obtain the desired item.

There are alternate ways that you can perform the sneaky storeroom part, and it’s best that you go along with whichever suits your preference. Anyhow, once you have the Goutweed, head back to Sanfew and speak to him to complete the quest.

And if you need runescape items and osrs gold, go to our site now, cheap & fast & safe online service, thank you.