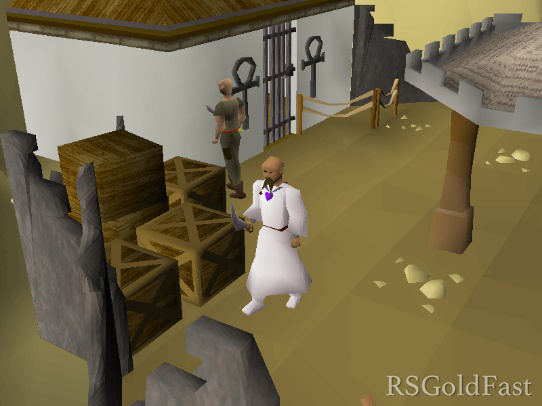 What is Desert Diary? It is a set of achievement diaries whose tasks revolve around areas within the Kharidian Desert, such as Pollnivneach, Nardah and Sophanem.

Rewards can be collected from the NPC named ‘Jarr’ in the Shanty pass.

So, without further ado, Let’s get started!

Catch a golden warbler. A golden bird that requires a hunter level of 5 to capture and is located in the Uzer Hunter area, east of the Shanty Pass. Items needed; Bird snare, Necklace of Passage (Eagle's Eyrie takes you right there).

Mine five clay in the north – eastern desert. Use a Necklace of Passage to Eagle’s Eyrie, then head north – east. Any type of pickaxe can be used to mine clay.

Enter the Kalphite Hive. The hive is located north of the Bedabin Camp, in the Kharidian Desert. You’ll need a rope in order to climb down the passage.

Enter the Desert with a set of desert robes equipped.The desert region is located south of the nations of Misthalin and Morytania. Items; Desert shirt, desert robe, desert boots.

Kill a vulture. They can be found north – west of the Agility Pyramid in the Kharidian Desert. Melee doesn’t work when vultures are up in the air, you’ll need a ranged weapon to kill one.

Have the Nardah herbalist (Zahur) clean a herb for you. Zahur is a woman in Nardah, found in the building just north of the bank. Have any grimy herb and 200 osrs gold coins in your inventory. 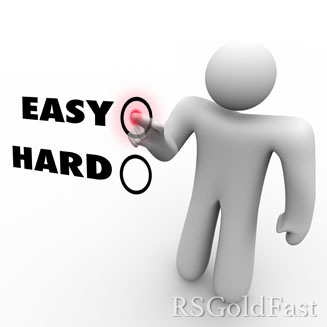 Collect 5 potato cacti from the Kalphite Hive. This item spawns in the south – west room where the Kalphite Soldiers are found. Rope, food and anti-poison is recommended to bring along with you.

Sell some artefacts to Simon Templeton. Simon can be found near Jaleustrophos (Agility Pyramid), south of Nardah and north – east of Sophanem. You can sell him any artefact collected from Pyramid Plunder (Thieving Minigame).

Open the sarcophagus in the first room of Pyramid Plunder. The minigame is located in the Jalsavrah pyramid in Sophanem. You’ll need to have started the quest ‘Icthlarin’s Little Helper’ to access the pyramid or you can use a Pharaoh’s sceptre to enter directly. A thieving level of 21 is also required to enter the room.

Cut a desert cactus open to fill a waterskin. Desert cactus can be found anywhere in the Kharidian desert. A knife and empty waterskin is required to fill cut and fill the cactus.

Travel from the Shanty Pass to Pollnivneach by magic carpet. Shantay Pass is a small area that separates Al Kharid from the Kharidian Desert. A travel fee of 200 gold coins is required.

· Desert goat horn will be dropped in noted form

· Simon Templeton will buy your artefacts as bank notes

· Pharaoh's sceptre holds up to 4 charges 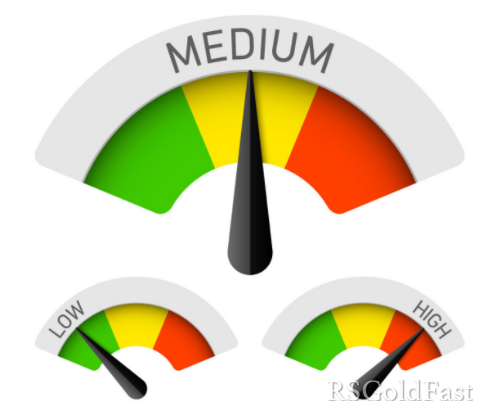 Climb to the summit of the Agility Pyramid. Follow Easy Task (Number 8) to get there. Water skins and Desert robes are recommended, along with an agility level of 30 to climb.

Slay a desert lizard. Desert lizards are Slayer monsters found in the Kharidian Desert, requiring level 22 Slayer to kill. Players must bring ice coolers in order to finish them off completely; these can be purchased from any Slayer master.

Catch a orange salamander. They are located in the Uzer Hunter area, east of the Shanty Pass. You’ll need at least 1 rope, a small fishing net and a hunter level of 47 to catch them.

Steal a Phoenix feather from the Desert phoenix. This bird can be found wandering north – west of the Ruins of Uzer in the northern Kharidian Desert by the clay mines. A thieving level of 25 is required in order to steal the feather.

Travel to Uzer via magic carpet. You’ll need to complete ‘The Golem’ quest and have 200 gold coins in your inventory to travel through this transportation method.

Pray at the Elidinis Statuette in Nardah. A shrine in Nardah located slightly north of the city’s fountain. Quest needed; ‘Spirits of the Elid’.

Create a combat potion in the desert. A herblore level of 36, along with Harralander portion (unf) and goat horn dust.

Teleport to Enakhra’s Temple with the Camulet. In order to get the Camulet, you’ll need to complete the quest ‘Enakhra’s Lament’.

Visit the genie. The Genie resides in the cavern west of Nardah, accessed by using a rope on a crevice in the ground. You’ll also need a light source and completion of the quest ‘Spirits of the Elid’.

Teleport to Pollnivneach with a redirected teleport to house tablet. (Ironman Mode Alternative) Enter your Player-owned house from Pollnivneach. Requirement; Scroll of redirection, house tablet and a construction level of 20.

Chop some teak logs near Uzer. Teaks can be found south – east of the Uzer ruins. Any axe and a woodcutting level of 35 is required.

· Pharaoh's sceptre holds up to 5 charges

Knock out and pickpocket a Menaphite Thug. Menaphite thugs can be found at the southern end of Pollnivneach. Completion of quest ‘The Feud’, a thieving level of 65 and a blackjack is required to knock out the thugs.

Mine some granite. Granite rocks are located at the western desert mining site, south of the Bandit camp. Requirements; Any pickaxe and a mining level of 45.

Refill your waterskins in the desert using Lunar spells. You’ll need to complete the quest ‘Dream Mentor’, have a magic level of 68, empty waterskin and 1 fire, 3 water, 1 astral rune to cast the spell.

Kill the Kalphite Queen. The Kalphite Queen resides in her lair south-west of the Shantay Pass, a second rope is required to reach the lower level. It is recommended that a bring a high-level combat gear and weapon. 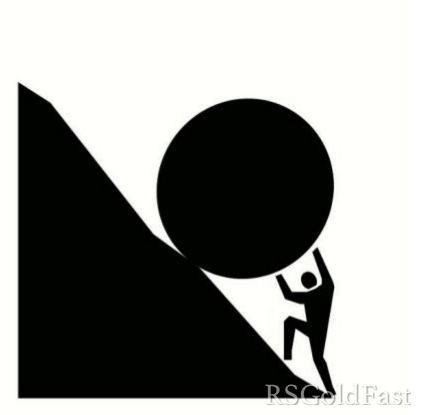 Slay a Dust devil in the desert cave with a Slayer helmet equipped. You’ll need to have started ‘Desert Treasure’ in order to enter the cave. Requirements; Slayer helmet, weapon, armour, 65 slayer, 10 defence and 55 crafting.

Defeat a locust rider with Keris. Scarab mage works too. Keris only needs to be equipped for death animation, you do not need to do any damage with it for credit. Keris is a dagger obtained after defeating the giant scarab at the end of the ‘Contact!’ quest. A light source, armour and a attack level 50 is required (to wield).

Burn some yew logs on the Nardah Mayor’s balcony. Awusah the mayor is the mayor of Nardah, he can be found by the blue ‘quest tab’ shown on the mini – map. You’ll need a yew log, tinderbox and a firemaking level of 60 in order to burn.

Create a Mithil plate body in Nardah. Requirements; 5 mithril bars, hammer and a smithing level of 68.

· Option to toggle the Camulet teleport location to the cavern entrance

· All carpet rides are free

· Access to a window shortcut in the Al Kharid palace that takes you to the south side of the palace, directly north of Shantay Pass (with 70 Agility)

· Pharaoh's sceptre holds up to 6 charges

Bake a wild pie at the Nardah clay oven. You can obtain a raw wild pie by adding raw rabbit to a part wild pie (raw chompy). A cooking level of 85 is required to cook the pie.

Cast Ice Barrage against a foe in the Desert. In order to cast the spell, you’ll have to complete ‘Desert Treasure’. 6 water runes, 2 blood runes, 4 death runes and a magic level of 94 is required.

Fletch some Dragon darts at the Bedabin Camp. The camp is located south – west of Al-Kharid and the Kalphite Lair. It is visited during ‘The Tourist Trap’ quest, so the completion of it is required. You’ll need 1 dragon dart tip, 1 feather and a fletching level of 95 to make one.

Speak to the Kq head in your POH (Player-owned house). A mounted kalphite queen head can be built in the head trophy space of the skill hall in a player-owned house. A Kq head, 50000 gold coins, 2 mahogany plank, 2 gold leaf, saw, hammer and a construction level of 78 is required.

Steal from the Grand Gold Chest in the final room of the Pyramid Plunder. You’ll need to have started ‘Icthlarin’s Little Helper’ to enter or you can use a Pharaoh’s sceptre to enter directly. Requirements; 91 Thieving.

Restore at least 85 Prayer points when praying at the altar in Sophanem. Sophanem, the ‘City of the dead’, is located far south in the Kharidian Desert, right on the edge of the map. In order to gain access, you’ll need to progress far enough into the ‘Icthlarin’s Little Helper’ quest. Requirements; 85 prayer.

- 100% protection against desert heat when worn

- Unlimited teleports to Nardah and the Kalphite Cave

· Permanent free access in and out of Shantay Pass's gate

· Access to a squeeze-through shortcut in the Kalphite Lair that takes you directly from the beginning of the maze-type path of the lair, to the tunnel entrance above the KQ Chamber (with 86 Agility)

· Pharaoh's sceptre holds up to 8 charges.