Nature Runes are a staple of the Old School RuneScape economy and are used extensively in Magic. One of the most frequently casted spells in the game is High Alchemy (and Low Alchemy) and is a source of gold generation within the game. Additionally, nature runes are also used in smithing, to quickly heat ores you can use Superheat Items. Ever engaged in a PvP fight? You’ll probably be familiar with the entangle spell that prevents you from running anywhere, or its weaker variants: bind and snare. Bones to bananas, and bones to peaches, are spells/tablets that require nature runes. These spells are paramount for food generation after killing multiple high-hitting enemies that drop bones.

As you should now understand, nature runes are highly in demand in the economy. Even if you’re an Ironman, high alchemy prices can heavily outweigh shop prices. In this guide, you will learn how to craft Nature Runes. If you’re interested in crafting them for money making, you can expect 1-2+ million of OSRS gold per hour. The exact GP/hour depends on the current market rates and how fast you are. As well as being a lucrative money-making method or source of nature runes (in contrast to enemy drops), it’s a great source of experience. You can expect up to 30,000 Runecrafting experience per hour.

The requirements here are fairly simple. You require at least 44 Runecrafting, but you will be limited at level 44. This is because the large rune pouch is only unlocked at level 50, and the giant pouch is only unlocked at level 75. Additionally, at level 91, your profits will double as you will craft double nature runes per each rune essence. If you’re intending on starting this method at 44 Runecrafting, expect your profits to be reduced to around 500,000 GP per hour. That isn’t an optimal number, but still quite decent.

This guide will recommend that you craft at the Abyss. The other nature altar is at fairy ring code CKR, but ultimately, you will have a much longer route. If you use that altar, you will reduce both your profit and experience: it is only worth pursuing if you’re a Hardcore Ironman.

You will need at least level 21 Mining, and to bring any pickaxe that you can.

The Abyss is located within the wilderness, albeit at a low-level of the wilderness. You do stand a risk of being player-killed, so using your best gear isn’t recommended. The best gear setup is dragonhide armor with stamina potions, and some food, alongside an amulet of glory (for teleports).

The area within the Abyss is not considered wilderness. The outside entry point is level 6-7 wilderness, so if you have Graceful gear - wear it. You cannot lose Graceful gear on death unless you somehow happen to wander to level 20 wilderness.

Before going for your first run, talk to the Mage of Zamorak at the Altar of Zamorak in Varrock. Do not wear any non-Zamorak God gear at any point. Complete the short quest of Enter the Abyss, which has the prerequisite of Rune Mysteries.

Bring all the Runecrafting pouches you have and fill them to the maximum with pure essence.  Having relatively high hitpoints and defense is certainly useful, alongside high agility. If you can easily gain levels in these skills through questing, consider doing that first. Otherwise, you should be ready to go. 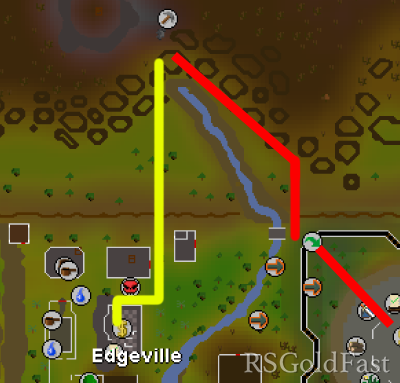 The route is quite simple.  Use your Amulet of Glory to teleport to Edgeville bank, withdraw what you want and deposit your high-value items. Having high-value items will make you a target for any player killer in the wilderness, and you risk losing them. It is recommended to carry the Black pickaxe, as it does not have any weight.

At the tip of the river, you need to speak to the Mage of Zamorak. He will teleport you directly to the Abyss, as long as you have completed Enter the Abyss as previously stated. Every 9 trips visit the Dark mage at the center of the Abyss, to repair your pouches.

Once you are in the Abyss, you may need to mine rocks out of your way, and there are certain Agility shortcuts that you can take if you have high enough levels. Empty out your pouches for pure essence and craft nature runes at the Nature Altar. Then, proceed to use the Amulet of Glory teleport to Edgeville Bank and repeat. 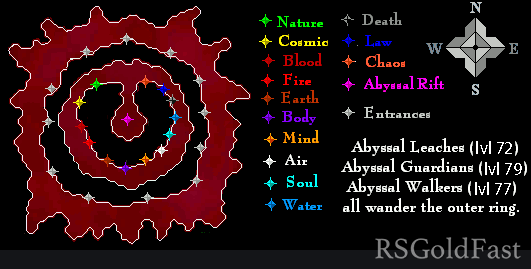 Navigating the Abyss can be difficult. Obstacles are randomly generated. The outer layer will have many monsters, and large numbers of them can attack you at once. Therefore, if you are a lower combat levelled player, wear protective armor and not Graceful. Whilst making inner layer entry attempts (such as mining through rock), you will not take damage. The importance of food is also emphasized here alongside protective prayers.

If you encounter any player killer on your journey to the Abyss, your priority should be escaping. This means running back towards the Edgeville boundaries and using protection prayers to negate any damage they try to inflict on you. If you are bound to be killed, use the protect item prayer.

To optimize your trips, you can complete the Heroes quest and use a Tarverly teleport to recharge your Amulet of Glories. Or if you’ve completed Dragon Slayer 2, wearing your Mythical Cape will allow you to teleport to the Legends Guild and recharge your glory in that fashion. If you haven’t completed these quests, you can also use the Charge dragonstone jewelry scroll/spell. The other alternative is to stockpile glories within your bank or visit the Grand Exchange.

Thanks for reading the guide. The more often you complete Nature Rune runs, the more second-nature it will become to you. It is an excellent source of Runecrafting experience and a great money-making method.