The first quest involving the Kingdom of Great Kourend, and is also listed as the 131st quest on OSRS. In this quest, you’ll have to help Veos to handle a mysterious client. Veos is a port master, as well as a treasure hunter who helps players to travel from Great Kourend to Piscarilius and Land’s End.

To start this quest, you must talk to Veos who can be found at the northern-most dock of Port Sarim, next to the Rusty Anchor Inn. Go to Port Piscarilius by speaking to him, and then once you reach, speak to him again, asking for a quest to start it. He will tell you about a client who is from the mainland, and that he is interested in gaining knowledge about the cities that surround the Great Kourend. He specifically wants to know about its social organisation and its hierarchy. Agree on helping him out to obtain an enchanted scroll, which must be used on the feather in your inventory to create an enchanted quill. If you don’t already have a feather, you can get one from Gerrant’s Fishy Business (Shop) located in Port Sarim.

Now, with the enchanted quill in your inventory, make your way to Great Kourend and talk to the general store owners there. You can identify the store through the general store icon shown on the mini-map. If you’re using a Kourend Castle teleport to reach the Kingdom of Great Kourend, then first talk Leenz, who can be found in the general store, just north of where Veos stands. Do this before teleporting to the castle because this is the only city where teleporting won’t shorten your walking distance. Once you’re done talking to Leenz, teleport to the castle and make your way to the cities general stores and speak to the owners about their respective city, as well as why it is important to gain favour in their city. 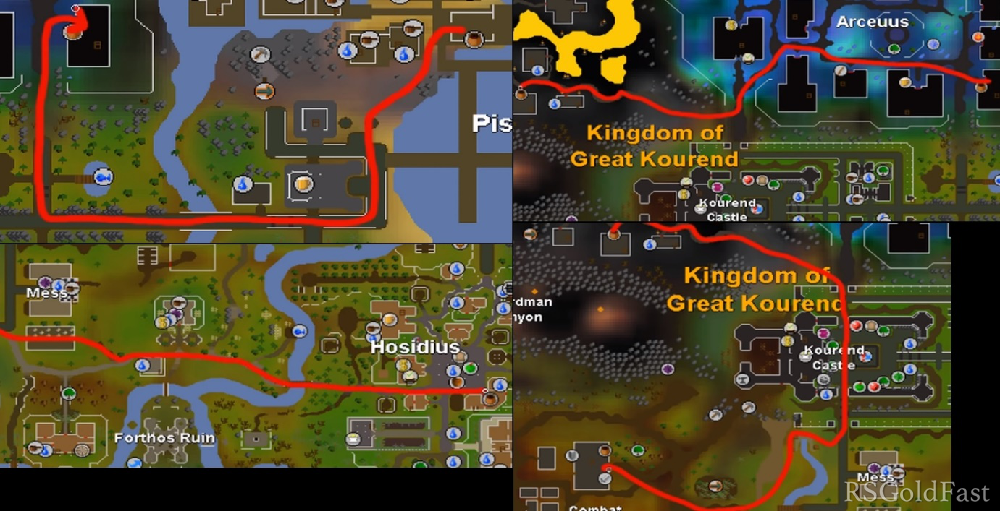 While receiving from one of the store owners named Regath, who is the general store owner of the city of Arceuus, the quill that you possess will mysteriously glow and damage your hand. You don’t have to worry as you won’t deal any real damage from it. Now, after speaking to all the store owners, you’ll start to hear a mysterious voice asking you to return to Veos. Speak to him and he’ll take the quill, as well as the scroll. When you tell him about your hand being damaged from it, he will tell you that the client apologised because mentioning the ‘Dark Altar’ provoked its emotions.

Veos will now ask you to activate a mysterious orb while standing next to the Dark Altar. The altar is located north of Arceuus, and you can reach there quickly using a teleport to the Wintertodt Camp through a Games Necklace. From Wintertodt Camp, follow the path south, then west until you reach a dark area, and from there change your direction to east. You will notice that the Dark Altar is at the end of the purple crystals.

Another way is using the Fairy Ring (Code C*I*S) and walking north-east from there after you teleport. Although, you’ll need to unlock the teleportation by paying a sum of 80,000 gold coins.

Once you reach the altar, activate the orb and it will shatter into broken glass pieces. Now, the mysterious voice will appear, and once again ask you to speak to Veos. Return to him and he will claim that he hasn’t spoken to you since the last time you talked in Great Kourend. After saying that, he’ll suddenly be possessed by the mysterious client and hand you the reward for completing the quest.

· Antique Lamps x2, which provides 500 experience in any skill that you choose.

· A Kourend Favour Certificate that provides 20% favour in any city of your choosing.

During or after completing the quest, you can start a post-quest called easter eggs. However, this quest offers no rewards.

You can use a set of wolf bones on Veos to remind him of his pet wolf named Copper, who was quite brave, gentle and loyal. He wore a crimson collar, and while travelling along with him Veos in the Fremennik Provinces, they were both ambushed by a pack of feral foxes and this resulted in fatal wounds. His pet wolf ran away, and he seeks help to find him. Foxes are located north of the Sinclair Mansion, just across the river. Keep killing them until you obtain a Copper’s Crimson Collar as a drop, and then hand over the collar to Veos.

At earlier times, you were able to charm Veos’ Mysterious Client using an activated Ring of Charos. This would result in him revealing his name, but it didn’t work on him, so despite the efforts, he reveals himself to be Xeric, who is a tyrant that rules Great Kourend decades ago.