Curator Haig Halen needs to take the Varrock Museum crew east to an unexplored landmass, but to that, he needs help to finish constructing a barge fit. Even after multiple attempts, he has failed to reach the unexplored island, so you’ll now have to venture across Gielinor while aiding the Varrock Museum, as well as increasing the possibility for a successful journey. In this quest, you will be unlocking access to Fossil Island, which is an unknown archaeological designation.

· 100 Kudos (You can earn Kudos by helping the staff at the Varrock Museum).

· 4 Teleportation scrolls to the Dig Site or a Dig Site Pendant.

· Skills Necklace (To get to the Woodcutting Guild).

· Xeric’s Talisman (To get to Xeric’s Lookout, which is north of the Woodcutting Guild).

· 2 Lumberyard Teleports (To get to the Sawmill located northeast of Varrock).

To start this quest, you must first speak to Curator Haig Halen, who is located at the Varrock Museum. Ask him about any interesting news that has been floating around, and he’ll tell you about an island that they’ve found, just north of Morytania. This island is believed to be a significantly archaeological place that is yet to be explored, and the curator, as well as his crew, are preparing to travel there. At the end of the conversation, Haig will ask you to speak to Barge Foreman, who needs an experienced adventurer. Agree to his conditions and head towards the Dig Site.

The Dig Site is located east of Varrock, and once you’re there, go north from the Dig Site to reach the Canal Barge. This is where you’ll find Barge Foreman, so speak to him and he’ll tell you that they’re in the final stage for the preparations to be completed, but he still needs to make some minor adjustments to the barge before the crew takes off. He needs to make the barge afloat with the help of a sturdier type of wood, and magic logs are no good for that because they have side effects. So, the only way to acquire better wood is by travelling to distant western lands in search of redwood. Foreman will ask you to talk to the Sawmill Operator located at the Sawmill north-west from where you stand.

Teleport or walk to the Lumber Yard and speak to the Sawmill Operator. He will tell you have he has arranged a good deal with the sawmill in Great Kourend’s Woodcutting Guild while handing you Sawmill Proposal. You must take the proposal to the Woodcutting Guild. Teleport there using your Skills Necklace, and deliver the proposal to the Sawmill Operator there. In any case, if you don’t have the level to enter the guild, you can use the eastern gate to speak to Berry, and he’ll have the proposal signed for you on behalf of the operator. Now, return to the operator in Varrock and hand him the signed agreement.

Now, you must go back to the Barge Foreman, and he’ll ask you to board the barge. Speak to the guard to board it, and then speak to the Lead Navigator there. The navigator will ask you if you have any clue about what happened in the previous attempts, so if you wish to know then ask him about it, or else click on the second option to skip the dialogue. They’ve attempted nine times in total, and he’ll tell what happened in the following way:

- The first barge had some serious design flaws... it didn't float.

- The second barge suffered from 'feature creep'. Senior museum staff stuck their oar in and added unnecessary features: 'go-faster stripes', a portable fossil centrifuge and a walk-on mini-museum. Needless to say, it had... buoyancy issues.

- The third barge made it out to sea, but a special sealant was used that attracted sea monsters. They didn't make it very far.

- The fourth also used a special sealant, this one attracted an iceberg.

- The fifth barge crashed into the sixth.

- We lost the seventh one.

- The eighth barge is still here, we think. An accident involving a magical explosion and some talking anchovies means that it is now believed to reside 12 seconds out of phase.

- The ninth version was built with magic logs. The barge gained some form of rudimentary sentience. It developed serious depression and ran itself aground near Crandor.

He will start to believe that the voyage is cursed, and he’ll refuse to sail the ship, until or unless you give him a surety that his crew is going to be safe from it. He will guide you towards a few experienced sailors located in Port Sarim’s Rusty Anchor Inn. Using your Amulet of Glory, Rimmington House Teleport, or the Rat Pits Minigame Teleport, fast travel to Port Sarim and speak to Jack Seagull in the Rusty Anchor Inn. Ask him if he had ever made any cursed voyages, and he’ll say that you can avoid it using a lucky Bone Charm, which can be obtained from the Odd Old Man in Silvarea. Another sailor named Ahab will interrupt in between, and tell you that a Potion of Sea Legs can help you sail the voyage without any harm. You’ll now have to ask the navigators which of the two items they prefer. 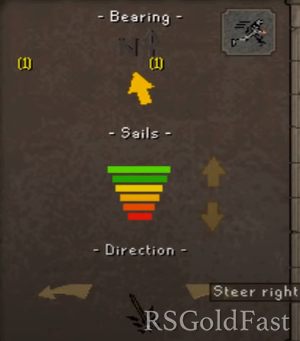 Go back to them, and the Lead Navigator will tell you that he prefers a Potion of Sea Legs, but the Junior Navigator will tell you that the Bone Charm is a better choice. So, head to the Odd Old Man in Silvarea Mine, located north of the Dig Site, and tell him about the cursed voyage trip to receive a Bone Charm from him. Now, go to the Apothecary, located southwest of Varrock Square and select the option ‘Talk about something else. Once you do that, he will ask you for a Marrentill Potion (UNF) and two bottles of Vodka. As you’ll already have the items in your inventory, speak to him again and he’ll make a Potion of Sea Legs for you.

Return to the Barge to give the Lead Navigator a Potion of Sea Legs, and the Junior Navigator the Bone Charm. Upon drinking the potion, everyone passes out except the Junior Navigator, but it’s of no use as he has never navigated in the open waters, so you’ll have to steer the barge on everyone’s behalf. You only have to steer left or right using the interface that pops up on your screen, and the progress bar on the side will show you how much distance is left to reach the destination. Click on the right arrow below when the top yellow arrow tilts to the left, and click on the left arrow below when the top yellow arrow tilts to the right. For a more consistent journey, changing the height of the sails can be helpful. Changing the height determines how the boat is shifting from side to side.

An easy trick is to first click the left and right arrow, following the yellow arrow until the boat is in linear motion. Spam clicking is not recommended, as it may bring a drastic change in motion while steering, so it’s best to take it slow. Once you feel that the boat is moving straight, click the up arrow on the sails section. If you feel that the top yellow arrows are tilting again, then reduce the speed by lowering the sails, and correct the direction using the left or right arrow. Continue this strategy until you reach your destination, and once you do, the quest will be completed. Congratulations!

Reading runescape guides on RSGoldFast.com, buy the best OSRS Gold, OSRS Infernal Cape, OSRS Accounts and so on from here, great service for you, 24/7 online.