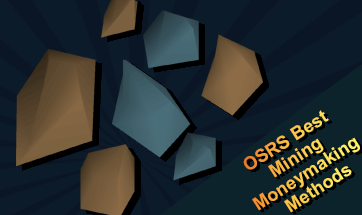 Mining is considered to be one of the most tedious skills in the game, although some updates have been made to increase engagement and profitability. Most activities consist of clicking on each replenished rock and hauling the load off to the bank when your inventory has been filled.

Mining basic ores aren’t that profitable, which is why you are better off power mining until you unlock AFK higher-level activities. This guide will go down a shortlist of optimal methods to make money while training mining.

The gem rocks in Shilo Village had been available since the Classic days, but it’s much more efficient with the addition of the underground deposit chest. Unless all worlds are occupied, it is best to mine underground in a loop and depositing in a chest. Every gem is worth keeping, from opals to diamonds.

While it is very click intensive, it is one of the better combinations of experience and profit and you should push over 50,000 experience per hour. Having a Gem Bag to free up inventory space would help, but it’s not necessary.

The vast majority of iron that’s mined in the game is dropped due to this method is more of a power leveling technique. If you need some starter cash, you may instead opt to bank your ores to have it add up over time. This can be done in locations like Varrock East, Rimmington, the Wilderness Skeleton Mine, Monastary Mine, and even the Mining Guild.

The Mining Guild would be the most efficient spot in P2P considering it is right next to a safety deposit box. If you bring along Varrock Armour, you will fill up your inventory slightly faster due to the double chance of getting ores.

There are many spots in Runescape that has Runite Ore, although these spots will have sparse supply. With one or two rocks in a spot, you will be frequently hopping worlds to make money, and the mining experience isn’t that great.

With the new Song of the Elves update, the Trahaearn mine is one of the easiest spots to load up on Runite ore. Considering that there is a bigger barrier for entry, this may be one of the better spots. In F2P, the best you’re going to get is the Rune Rocks by the deadly red spiders. Even though it is far from a bank and has plenty of competition, it can be very profitable if you efficiently evade player killers.

Amethyst rocks were introduced into the game as a means to revive the Mining Guild and it’s used to make high-level ammunition. It has a steep level requirement of 92, making it the highest requirement ore in the game.

Mining amethyst crystal deposits is a very AFK method to train and is somewhat similar to ming Pay Dirt. If you have high enough crafting level, you may chisel amethyst into arrow or javelin tips to avoid banking.

Requirements: Song of the Elves

If you have completed Song of the Elves, you’ve unlocked the most profitable way to make money while training Mining. The idea is to mine the correct rock formation, use the ores on the furnace, imbue the ores on the altar and then throw them at the boss. Each mining tick on either the boss or rock will give 35 experience, which is the same as mining iron ore.

Just like Wintertodt, it is done in large groups of players. The main difference is that the player with the best performance will get an enhanced drop, including a chance to get the pet. Tick manipulation is commonly used by players, making this boss quite competitive.

Players may get lucky with frequent Crystal Tool Seed drops, but the bulk of the cash will be in large stacks of ores and bars. Even large quantities of Runite may drop.

Except for Zalcano, mining isn’t a very efficient skill for money-making overall, which is why players choose to power mine into their goal levels. Some methods like clay mining weren’t mentioned due to them being quite slow in experience and impractical for higher-level accounts. Using the methods above, you can break the monotony and make extra runescape gold for bonds or investing in other skills.