Beneath Cursed Sands is an important part of the Desert Quest series. It revolves around the Tombs of Amascut, which is also known as the third raid in the game. Due to the quest, the Ruins of Ullek and the Necropolis were added to the south-eastern part of the Kharidian Desert. 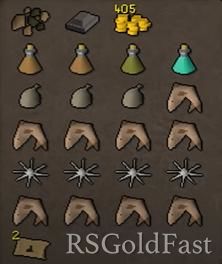 · Cooked or Raw meat (Anything that isn’t a fish) 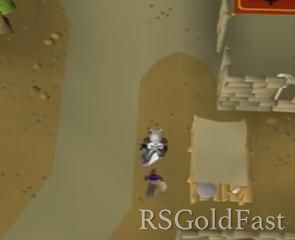 You can start the quest by speaking to Jamila, who is located in Sophanem. She’ll tell you about an exclusive item in her possession to give you for helping the people of Sophanem. That’s when you agree to start the quest.

As she tries to fit the gold ring on your finger, she’ll give you a message and tell you that the ring is too small. When you read the message, you find out that the sender wants to meet you east of the city.

So, head to the campsite, north of the mining site by the cliffs to find Maisa, who is a Spy from Al-Kahrid. It’s someone you have met during the Contact! Quest. She’ll tell you about how the people of Menaphos are bypassing the quarantine while excavating the Necropolis south of Sophanem. 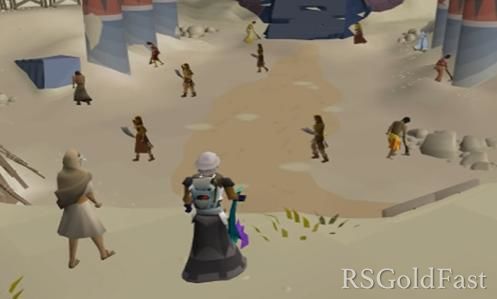 In addition, she’ll also state that the behavior of the citizens has changed. Agree to go with her to trigger a cutscene. Once it ends, you’ll be at the Necropolis where you’ll see many Menaphite Guards and citizens excavating the region. Commune the obelisk north of the mines to teleport back here when needed; however, you’ll need a Pharoah’s Sceptre on you. 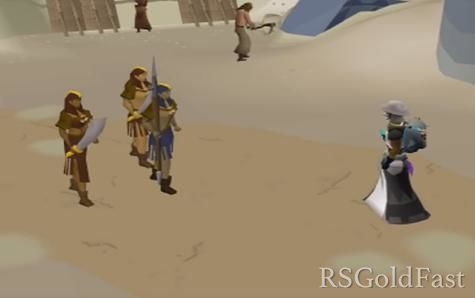 Visit the Jaltevas Pyramid which is to the southeast, and then inspect the entrance that is blocked. After that, speak to a Menaphite Guard or citizen to trigger another cutscene. In the cutscene, two Menaphite Guards, along with the head will confront you and Maisa will kill one of the guards to start a fight. When that happens, you direct your focus to the Menaphite Guard.

Make sure that you’re not using any protection prayers during the fight or else he’ll shout that ‘Your false gods will not protect you’ while dealing additional damage. Once defeated, another cutscene will begin where you discover that it was Amascut’s fault for hypnotizing everyone and blocking the pyramid with her inside. The guard will also tell you about the Scabarites who helped her, and that they came from the ruins located northeast of where you currently stand. Maisa later asks you to get back to her camp.

Speak to Maisa again, and she’ll ask you to explore the cliffs to locate the Scabarites. After the conversation ends, search the equipment in one of the camping tents to find a Tinderbox (if you don’t already have one). You can also get a Spade, north of the campsite.

From here onwards, head south, and then east to find a staircase that takes you to the Ruins of Ullek. Go to the furnace next to the well and ignite it using Coal and a Tinderbox.

Now, search the well to get a Stone Tablet and read it. You’ll discover that there’s a hidden chest buried in the southern ritual pillar, which is down and southwest of the staircase. Quickly dig at that spot to get the chest and open it using the code ‘1118513.’ You’ll find a Scarab Mould within it.

Head back to the furnace and make an Iron Scarab Emblem using an Iron Bar and the mold. After that, go north to inspect the pillar that is in front of the stairway and use the emblem on it. Rotate the emblem until it is faced down to unlock the entrance. 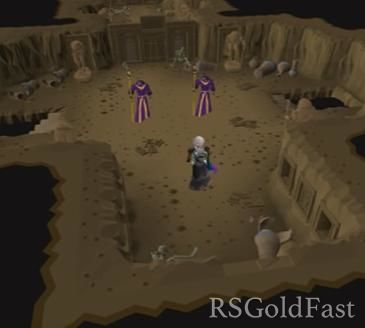 Climb down and you’ll be attacked by two Scarab Mages. You can use protection prayer to minimize the damage. Shortly, a Scarab Swarm will also spawn and start attacking you. Be careful as it can inflict poison. You can ignore the swarm and concentrate on killing the mages.

Once killed, continue down one of the two stairs while following the green arrows to reach the southern lever. Activate it and start running along the red lines to pull the second lever. You need to hit them within a set of time to continue ahead. So, don’t delay.

Head back to the junction and enter through the locked door. Inspect the southwestern plague to discover four emblems (depicting a Human, Scarab, Crocodile, and Baboon). The northwest plague will give you a riddle to know the order of how the emblems should be placed.

The order is completely random, but it won’t change if you leave and return. You can use the following to solve the riddle.

· "To the one that arrived first, he offered item 1." – Emblem corresponding to Item 1 should be placed in the center-south urn.

· "The one that was offered item 2 came from just south…" – Emblem corresponding to Item 2 should be placed in the southernmost urn. 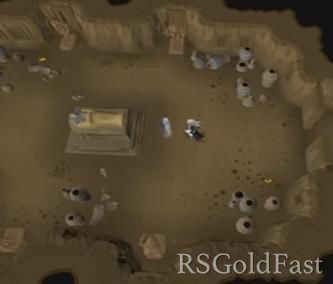 Now, pull the southwest lever to continue. Please note that if you have placed the emblems in an incorrect order, you’ll deal damage, get poisoned, and have your stats decreased (temporarily).

Speak to the spirit named Mehhar, who is the son of Osmumten. He’ll tell you that the Necropolis Pyramid is actually the Tomb of Osmumten and there are divine weapons burned with him. It’s likely what Amascut is seeking.

After giving you a brief history of the Kharidian Desert during the Second Age, he’ll ask you to free the High Priest from Amascut. Finally, search the urn at the back to get a Rusty Key.

It’s time to head to the upper level of the dungeon and defeat the Champion of Scabaras. He’s immune to magic while being resistant to melee attacks; however, it’s recommended that you use ranged to defeat him.

Once you’re ready, unlock the door to begin the fight. He’ll start by attacking you with shadow attacks from a distance and normal melee attacks as your close into him. In between the attacks, he’ll also use three different special attacks.

· Shadow Burst: He’ll cast a shadow beneath him and attack you with bursts of shadows. The attack has a distance of four tiles and it can deal over 40 damage. It’s recommended that you kite the boss to avoid the hits.

· Shadow Portal: He’ll start by shouting ‘We are born in the shadows!’ and then summon a Shadow Portal. It has a cap of 20 HP, and it explodes after that, dealing about 35+ damage. So, it’s best to quickly destroy it.

· Shadow Flames: He’ll start by shouting ‘The children of Scabaras are eternal,’ and spawn a poisonous Scarab Swarm. It leaves dark fire along its path but has a heath of only 5 points. Since it’ll hinder your movements, it’s better if you deal with it as quickly as possible. 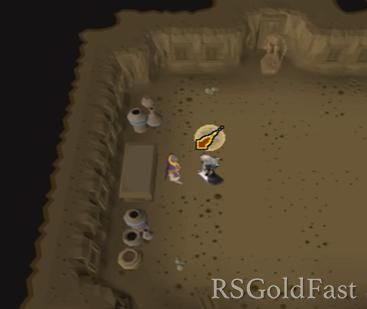 Besides that, you need to pray Magic Protect throughout the fight to minimize the damage. If you end up dying, you can find your grave outside the tomb’s entrance. Once defeated, speak to the High Priest to discover that Amascut has captured the lesser Gods. He’ll also tell you about how Pharaoh has also been hypnotized, and that she needs to be quarantined. Lastly, he admits to everything that he has done.

It's time to head to Nardah and visit Zahur’s shop which is located south of the fourth. Both, she and Maisa will bring it to your notice that the pox originated from the Cadavaberry Bush. After which, you’ll be tasked to retrieve a Lily of the Elid for the cute. You can find it on an island located west of Nardah.

If you don’t have raw or cooked meat on you, you can purchase it from her shop. Now, head west until you come across the ‘River Elid.’ Try to jump the stepping stones there, and throw the meat to distract the crocodiles. Quickly pick the lily and return to Zahur. 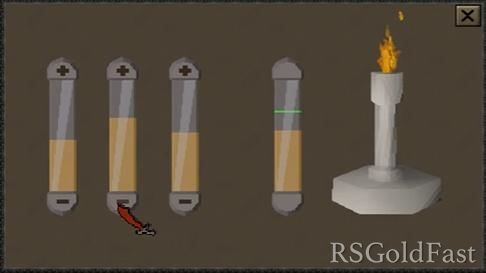 She’ll start making the cure and ask you to warm up her equipment with the right temperature. First, raise the middle and right bar to the max, and then lower them until it’s done. She’ll now ask you to take the cure to the High Priest in Sophanem. So, do the needful. 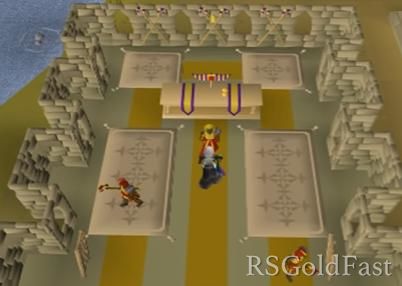 Since you now have to face a level 351 boss, make sure that you’re fully equipped before heading to the Necropolis. Once you’re ready, speak to Maisa. You can quickly get there using a Pharaoh’s Sceptre, or by using the Fairy Ring (code: A*K*P); however, you’ll need 62 Agility to get that path.

Now, a cutscene will trigger showing how everyone has been freed from Amascut’s influence. Two stay behind to help mine the blocked entrance of Osmumten’s Tomb. Next, you and Maisa head back to the camp where Osman is found spying on here. 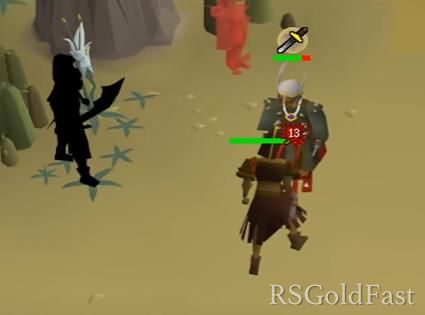 You then argue with Osman about his actions, while he stands on the points believing that it’s all Pharaoh’s plot to keep Al-Kharid divided forever. During the conversation, the ground starts to shake with lighting striking the sand. It causes flames to burn around and triggers the appearance of Menaphite Akh who is here to kill you.

She’ll use melee to attack you and occasionally use special attacks. The moment she twitches is when a lightning bolt attack is going to be performed. You’ll have to evade it all cost or end up dealing 70+ damage. You can evade it by walking behind or beside her.

She can also summon a Menaphite Shadow for ranged or magic attacks. So, kill the shadow as quickly as possible and continue the fight. There are times when she can swap places with the shadow, 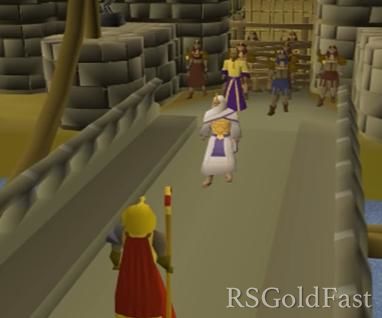 If you end up leaving the fight midway, you can speak to Osman at Maisa’s camp to restart it, and if you end up dead, you can easily retrieve your items within the normal timeframe.

Once she is defeated, go to Sophanem and speak to Maisa or the High Priest to trigger the final cutscene. It’s when Pharaoh Kemesis will appear and announce the end of the city’s quarantine.