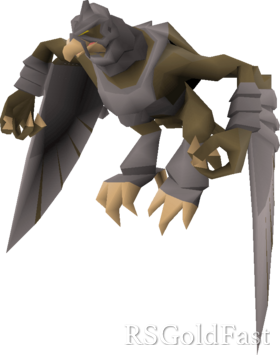 Kree'arra is one of Armadyl's most trusted generals. He is among the most powerful of the surviving Aviantese, and leader to the forces of Armadyl's Eyrie in the God Wars Dungeon. In order to reach the encampment, players must first wield any crossbow along with a mithril grapple. A Ranged level of at least 70 is then required to navigate the chasm. To enter the boss room, players must have slain 40 followers of Armadyl, with Aviansies and their spiritual variants being his only followers within the dungeon.

Unlike the other god wars bosses, regular Melee attacks will not work as Kree’arra is airborne. You can only use Ranged or Magic to fight against him. If you get Aviansies as a slayer task; Kree’arra and his minions will both be counted as a kill.

· A Crossbow of any type

A strategy against Kree’arra is a must, if you’re entering the lair solo or in a team.

When starting a trip at Kree'arra, many players prefer using an ecumenical key to skip kill count. This is due to how slow Armadyl kill count is obtained, along with all of the followers' innate sense of danger, where they will immediately attack the player upon them attempting to attack, even if they can actually hit them or not. 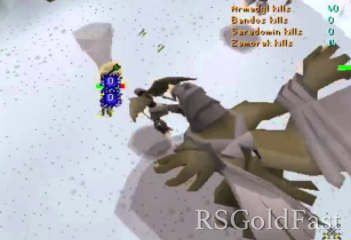 Kree'arra, unlike the other generals, utilizes all three forms of combat. Offensively, he possesses 300 Attack, 200 Strength, 200 Magic and 380 Ranged, with +136 melee accuracy, +12 melee strength, +120 ranged accuracy, and +50 ranged strength. He is arguably the most defensive general of the four, with a Defence level of 260, possessing +180 stab, slash and crush (even though he can't be attacked with normal melee) and +200 magic and ranged bonuses. By default, Kree'arra attacks with ranged and magic. The ranged attack consists of grey dust tornadoes, while the magic attack is a blue dust tornado. Kree'arra's magic attack is classified as ranged magic, meaning that it's accuracy rolls against the player's ranged defence bonuses, rather than magic. The ranged attack deals up to 71 damage, while his magic attack deals up to 21. Both of these attacks hit all players in the room, and can knock the player back a tile unless they are standing in the corners of the chamber.

You must keep Protect from Missiles on at all times while Kree’arra is alive, or you might end up in a swift death.

If you’re going to encounter him solo, the best method of killing Kree’arra is to use red or black chinchompas. Kree’arra has high defence bonuses, so hitting him is significantly harder compared to other generals. In case of chinchompas – if the hit is successful, then all the other monsters in range will take damage regardless of their defence level and bonuses. In order to utilize this method, both the targets need to be near or directly on each other.

When you utilize this method, do keep it mind that Kree’arra must be targeted when the you’re not attacking (Off-tick); or else, you will attempt to use Melee.

When the room is cleared and Kree'arra respawns, he attempts to melee the player, his hitboxes will also collide with Geerin, allowing chinchompas to be used on both of them for equal effect. The primary advantage of two chinchompa targets allows players to maintain more consistent damage, although there are also a few disadvantages in doing so; if the player's reflexes are too slow, Kree'arra will move out of the chinchompa's AoE, forcing the player to fully lure Kree'arra in onto Kilisa, and also reduces the overall amount of health healed if Geerin does not respawn before Kree'arra dies. 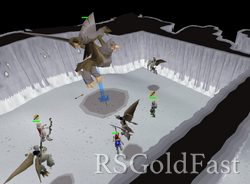 It is advised that you walk under Kree’arra after every shot to reduce his attack rate, because he has a better attack speed of around 3, or 1.8 seconds. Once Kree’arra dies, switch to your toxic blowpipe to kill off the minions in order. First attack Skree, as Kilisa and Geerin can be stacked for ‘Blood Barrage’. Geerin and Skree will generally attack on different ticks (Due to the spawn location), allowing their attacks to be flicked. You can also save more food, by flicking all three minions’ attacks.

If you’re going in as a team, every player inside the room deals damage from Kree’arra’s attacks, so bringing a designated tank is pointless. The best option is to bring the strongest crossbow in possession (Twisted Bow) with ruby diamond enchanted bolts, and a blowpipe to switch and kill the minions’ when Kree’arra dies.

To conclude this guide, I’ll list the necessary equipment’s recommended to wear during the fight. The list is in the exact order – Most effective to the least effective equipment’s (Right – left).

Ring – Ring of Suffering (i), Archers Ring (i), Brimstone Ring, Ring of Life

Ring – Ring of Suffering (i), Archers Ring (i), Warriors’ Ring (i), Brimstone Ring, Ring of Life