The third quest in the Dorgeshuun quest series which involves a plot that is put together by Sigmund, He plans to destroy the Dorgeshuun, along with the dwarves who are building a new underground rail link between Keldagrim and Dorgesh-Kaan. However, the work cannot be completed because of the ancient goblin artefacts, and they’re in need or an archaeologist. 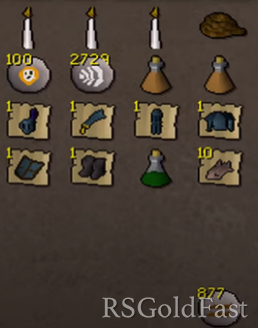 · Death to the Dorgeshuun

To start the quest, you’ll have to talk to Ur-tag or Ambassador Alvijar, who can be found in the northern part of the Dorgesh-Kaan city (Quest start icon). They will let you know about the train route that they’re constructing between the cities. Once you’re done talking, go to the southwest part of the city until you see a transportation sign, go through it and you’ll reach the train station.

Keep heading south, and you’ll see an NPC called Tegdak, talk to him and he’ll give you a trowel, as well as a specimen brush. Now, dig up the artefacts that are hidden on the unfinished tracks with the help of the trowel and clean all six artefacts on the specimen table using your brush. Upon cleaning, you’ll end up with an axe head, a helmet fragment, an ancient mace, an armour shard, a sword fragment and a shield fragment. Head back to Tegdak and tell him what you’ve found.

Before continuing the quest any further, it is recommended that you bank your valuable items and equip your magic or ranged gear to fight as you will not get a chance to the bank before the fight starts.

Take Zanik with you, and go north to exit the station. Head west of Ur-tag’s house and visit the goblin scribe where you started the quest. Tell him about everything that you’ve found and he will suggest you talk to goblin generals in the goblin village as he is unaware of the symbols.

Don’t use any teleportation means or else Zanik will be left behind. Instead, talk to Oldak in the north-western part of the city.

Oldak will teleport you directly to the goblin village and hand you over a spear that will help you teleport back into the city. Once you’ve reached, talk to one of the generals in the village and a cut scene will begin where you’ll find out that Zanik is the goblins’ prophesied chosen commander and the mace has the power of the goblin war god, Bandos.

After the cut scene ends, two H.A.M members will show up and randomly start attacking the goblins with ranged and magic. Take the west side path, just around the back of the building and stay out of the enemies’ attack zone so they don’t notice you. Climb up the tower and kill the H’A’M mage, as well as the ranger with the help of either range or magic. You can use the bronze crossbow and bronze bolts that spawn upstairs just next to the ladder if you don’t have a ranged weapon. However, they don’t respawn if you’ve run out of ammo, so it’s better that you bring your own.

You can choose to fight them both at the same time or take cover behind the box to avoid dealing damage. If you feel that things are going sideways, you can click the hide behind the crate option while thinking of a strategy to defeat them. Both the NPC’s will hit at the same time, and their hits will not miss, so if you use the protection prayer, they will only reduce the damage and not completely avoid it. Another strategy would be to attack the enemy and hide behind the crate instantly to avoid any damage dealt. You can also use the crossbow on rapid-fire to attack with fire bolts and to use darts, you’ll have to use long-range combat style.

Once they’re defeated, another cut scene will begin where Zanik is kidnapped by Sigmund and the generals will help you by sending two of their sergeants. He will ask you to meet them at the Lumbridge swamp and he’ll give you the ancient goblin mace. Sigmund plans to kill Zanik on the train tracks that is being constructed between the cities so that he can make it look like an accident and break a war between the two cities. You won’t be able to enter Dorgesh-Kaan this time as the entrance staircase will be closed, so you must use the Lumbridge swamp entrance and meet sergeants who will help you in this journey. 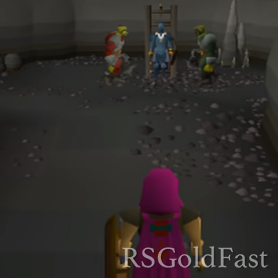 The two sergeants are named Slimetoes and Mossfists. Before entering the cave, make sure that you have a light source. Climb down the entrance and just next to the rope should be another ladder that will take you down. Here you’ll see a H.A.M guard who then runs away to get reinforcements. Talk to both the goblins and ask one of them to wait behind, so that he can run down the hallway into the room nearby and hide while the other two guards run past. Ask the second goblin to wait in the room, and when the two guards walk past the room, engage them with the goblin that was left behind. Defeat them and hide behind one of the boxes until the third guard shows up. Once he passes, run back into the room and ask the second goblin to follow you and engage the third guard. Once he’s defeated, head down the ladder where you’ll find a level 64 NPC aka Sigmund.

You can use any combat style to attack him, where he’ll turn his prayer on. Upon prayer activation, wield the ancient mace and use its special attack to drain his prayer. Continue fighting, as he will now deal damage, but he does have high defence so low combat levels need to be careful. Once he’s defeated, he will teleport away. Help Zanik out and get ready for the final cutscene. Quest Completed!

Thank you for reading, get OSRS Gold from RSGoldFast.com, so quickly and safe, buy now.