A new resident has arrived at the Draynor Manor and, adventurers rejoice, she is a damsel in distress. Ava finds the Manor’s beds not to her linking and is suffering from insomniac nights. Now, what can you do about it? You could help Ava in her search for a good night’s sleep, and maybe end up receiving a good reward from the budding scientist, because who knows what she might produce.

Note: You cannot boost your skills to gain an advantage in this quest.

· Mithril Axe (No other type of axe will do)

· Ghostspeak Amulet (Obtained after the completion of ‘The Restless Ghost’ quest)

· Ectophial (if you have done Ghosts Ahoy)

· 1300 osrs coins (to charter from Port Sarim to Port Phasmatys)

· Varrock teleport (tablet) (if you have not entered Morytania before)


To get started, you’ll have to talk to Ava in the west wing on the ground floor of Draynor Manor. She’ll be behind a secret door, so you’ll have to search a bookshelf to access it and get to her.

After you talk to her, she says she will make you something if you fix her bed. But in order to do that, you’ll need to get her some things. She will then tell you to get her two undead chickens.

Now, go to the undead chicken farm located west of the Ectofuntus with your Ghostspeak amulet and Ecto – tokens , and talk to Alice.

- The easiest way to reach Alice is using an Ectophial to teleport to the Ectofuntus (after completing Ghosts Ahoy).There are 4 different ways to reach Alice,

- If you have access to the fairy rings, code ‘a*l*q’ will take you to the eastern side of the Haunted Woods just south of the farm.

- If you have entered Morytania before, take the charter ships on the southern docks of Port Sarim to Port Phasmatys for 1300 coins.

- The POH Kharyrll Teleport will take you to the Canifis pub, from which you need to run north-east. You can use these via a hosted house as well. 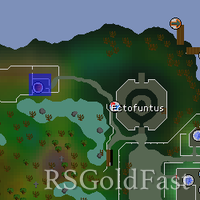 Once you’ve finished the conversation with Alice, she will then talk to her husband located in the farm, near the undead cows. While alive and her husband talks, you will have to keep interfering until you found out that he wants to speak with her directly; in order to do that, you must get the Old Crone to make a modified Ghost-speak amulet for Alice’s husband.

The Old crone can be found in the house east of the slayer tower, talk to her twice and she’ll give you a crone-made amulet.

Head back to Ava, and hand her over the undead chickens. She will now need a magnet, so head to the north – west corner of the manor and talk to the witch. Give her 5 iron bars and she will give you a selected iron, along with instructions on how to turn the bar into a magnet.

Use your skill necklace and teleport to the Crafting Guild and run to the centre of the mine north – east of Rimmington, and use a hammer on the selected iron while facing north to turn it into a bar magnet. Time to return to Ava with the magnet, so that she can tell you her next request.

If you’re not facing north, it will not work.

She will now ask you to get some undead twigs from one of the undead trees around manor. Not the normal dead tress that you can chop, but the type that attacks you as you walk past it.


When you try cutting an attacking tree, you’ll fail. Return to Ava and she will ask you to go see Turael, as he has been using his Slayer skill to find out a way to defeat the tree.

You can use your Combat bracelet to teleport directly to the Warriors’ Guild (or Games necklace to Burthorpe, or Burthorpe Games Room teleport), and talk to the slayer master (Turael) to the south – east. In exchange for a mithril axe and a holy symbol, he will give you a blessed ax , which can be used to cut the undead trees.

Now, Return to Draynor Manor and chop the undead tree with the axe. If you succeed, you will receive undead twigs .

It is possible to fail at this if your slayer level is low.

When you deliver the twigs to Ava; she will tell you that she has almost completed the invention, but some of her research notes  still needs translating.

In final part of the quest, you will have to translate her research notes by changing the colours of the buttons at the bottom to find out the combination; as shown in the picture to your right.

You can simply click on them to get the combination right. Once you have ungarbled it, talk to Ava and she will tell you to get a piece of hard leather and some polished buttons to finish the device.

You can obtain polished buttons from,

- Digging at the Digsite

You’ll receive a pattern (Quest item), which you will need to combine with a piece of hard leather and some polished buttons to create a contained. After that, just hand the container over to Ava, and the quest will be completed!

Thank you for reading on RSgoldfast.com, buy OSRS Gold from us now, cheap & fast!