A slayer boss that can be encountered in the Karuulm Slayer Dungeon. The alchemical Hydra is a 95 level NPC and can be fought after being assigned by a hydra slayer task. To get to the boss, a player must head north past the Tasakaal, and then switch east when they come across the hydras. Heading east, you’ll eventually come across the entrance to the lair by Orrvor quo Maten. Although you can also use the mysterious pipe just behind Kaal-Ket-Jor to easily get there, it requires an agility level of 88 to pass through.

The fighting area for alchemical hydra is instanced, and if a player dies while fighting, they can claim their items back from Orrvor quo Maten for 100,000 gold coins.

In case Orrvor quo Maten is holding your items, and you die outside the area, then you cannot reclaim the items back because they’ll be lost forever.

The alchemical hydra respawns every 20 seconds, and while you’re in the room, you cannot access the doors as they’ll be jammed. However, you can still teleport out of the area.

Alchemic Hydra uses both ranged and magic attack style against players. Regardless, if the player hits the boss or not, it changes its attack style after every three attacks. The attacks can be distinguished by their looks, as ranged attacks are fanged projectiles and magic attacks have two small green projectiles. In the case of Alchemic Hydra, the side heads are the ones that normally attack the player. The right heads attack with ranged and the left heads attack with magic and these heads can at times also attack twice, with a maximum damage of around 17 each. Once the bottom heads have fallen off, the double attack is reduced to single attacks and becomes easier to kill.

Even though the hydras Defence is extremely low, it does have high magic and ranged level and uses both these combat styles as its primary attacks. Items like the Dragon Hunter Crossbow and Dragon Hunter Lance can be very useful for the fight, as the hydra is draconic and the items can provide additional accuracy and damage bonuses. It is recommended that you range hydra as it provides a better bonus than using melee.

The heavy damage reduction that the hydra has during the first three phases can only be removed by spraying the correct chemical. The pools in the area cover 5x5 AoE, and the vent being the centre of that AoE. Spraying the hydra with wrong chemicals can result in adding enrage stacks that increase the damage of its attacks. Another thing to keep in mind is that you shouldn’t stand on the chemical pool as it will inflict damage upon the player.

When each phase does start, the hydra will auto-attack you three times before using a special attack.

Let us get more into detail by talking about the phases of Hydra. 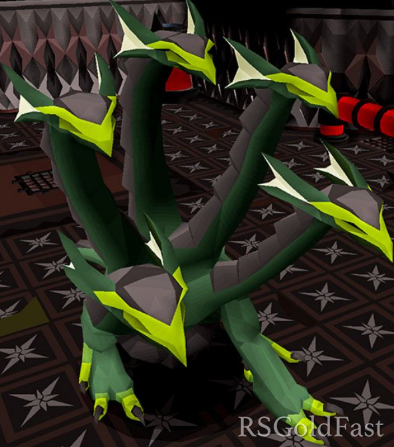 The first phase starts with a green carapace, and the hydra should be lured to the red chemical pool. After the first kill, the player can run and stand right next to the pool to wait for the first phase hydra to be spawned and easily lure it in. After the first three attacks, The Alchemical Hydra will launch 4 or 5 poison blobs around the player's location; 1 on the player, and 4 randomly around it.

The blobs have a 3x3 splatter effect dealing up to 7 damage, and standing on the poison pools will deal up to 12 poison damage per tick. The attack can be avoided by standing west of the red chemical vat, which is all the way south and when the hydra is positioned over the chemical pool, you can move north two tiles. When it attacks with poison, just move west two tiles.

After the Hydra reaches 75% in the green phase, the bottom-right head will fall off and it will change its carapace to blue. Now, the player as to run north to the green chemical pool to lure it in. In this phase, the hydra launches electric balls in the centre of the room, which then turns into currents in the four corners of the area. If you end up getting hit by the lighting current, you’ll be stunned and will deal with 20 damage. The easiest way to avoid this is by standing in the middle of the room until it shoots its lighting and then making your way out of the box they form. It is possible to trap the lightning by standing in the north-west corner, moving one tile diagonally south-east when the lightning is two tiles away from you, and instantly moving one tile north.

When the hydra reaches 50% of its health, the bottom-left head will fall off and it will change its carapace to red. The player will then have to lure the hydra to the blue chemical pool. In this phase, the hydra will walk to the centre of the room and face towards the direction of the player. This will result in the player being stunned, but at the same time, they can also attack the hydra. When it is in the centre, it will breathe out 5x5 layer of fire towards the players' sides based on where they’re standing. The tracking fire follows the players' movement, and it is recommended that you turn your runoff and walk around in the area to avoid getting damage. The hydra doesn’t attack until four seconds after the tracking fire is sent out, so you have a good amount of time there to move and get into position. 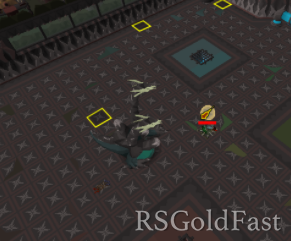 For the final form, once the hydra reaches 25% of its health and the middle head falls off. It changes its carapace to grey and does not require any counter, so you don’t have to lure it into any of the chemical pools. Now, a message will appear ‘The Alchemical Hydra Becomes Enraged!’ and increases its stack to a maximum, which is capable of killing a player in about two hits.

Now during this phase, the hydra attacks in the opposite way. For Example: - If the hydra used magic in the previous phase, then it will use ranged and vice versa. Just like the boss Zulrah, the hydra will change its combat style after every attack. Keep in mind that the hydra can use attacks from any of the previous phases and it is recommended that you use the prayer Flick until the hydra is killed, as well as keep an eye on your prayer points.

Thank you for reading and buy osrs gold from us all the time, thank you again. Good luck!