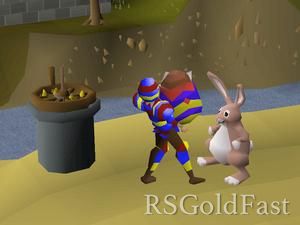 The 2022 Easter Event in Old School RuneScape is about helping an Easter Bunny make transport eggs across the Kharidian Desert and Al-Kharid city. You can participate in the event by heading to the Holiday Event icon displayed north of the Al-Kharid bank. The icon is visible on the world map. 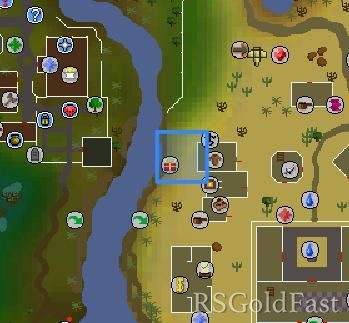 To start the event, you need to head north of the Al-Kharid bank and speak to the Easter Bunny. He needs you to deliver Easter Eggs deeps in the deepest part of the Kharidian Desert. However, the only problem is that the Easter Eggs melt quickly because of the heat so you need to ask the people of Al-Kharid to provide a solution. 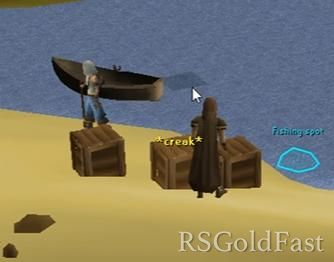 He’ll give you some information but only in exchange for a favor. You’ll have to retrieve a report for him from an associate who is hiding south of the bank. Ali will also give you a Special Hot Sauce bottle.

So, speak to Suspicious Crate on the southeast coast. The associate will believe that Ali sent you by smelling the Special Hot Sauce. Before he hands over the report, he’ll request you to bring him a Kebab from Karim.

Visit Karim and ask him to make a Kebab using the Special Hot Sauce bottle. After that, return to the associate, hand over the kebab to him, and he’ll hand you the report. 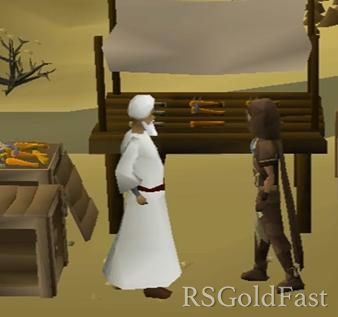 Head back to Ali, and he’ll tell you about a Fellow Tradesman who is selling Choc-Ice, which is a treat covered with a chocolate shell and filled with Camel Milk Ice cream.

You need to speak to the Easter Bunny again and tell him about Choc-Ice. He’ll then give you a Big Bucket and ask you to milk a camel. You can find one east of Ali Morrisane, by the name Elly the Camel. Use the bucket on her to fill it with milk, and then head back again to the Easter Bunny.

She’ll ask you to leave the cave because Camarst won’t allow her to use the magic spell after a recent incident with his friend. However, as she’s about to cast the spell, the NPC named Xi_plzPetDogz_xiX will appear and attack you both. But he’s caught in Phoebe’s magic and killed. 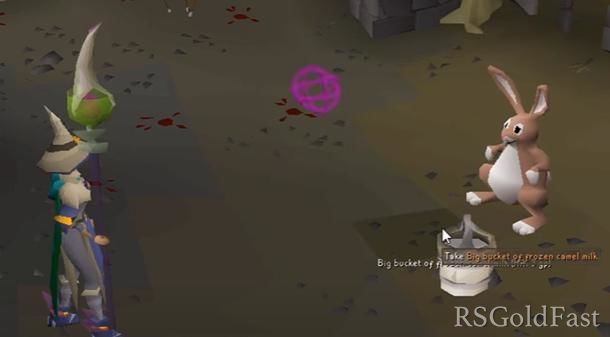 As she fulfilled her part of the deal, she casts the Telekinetic Grab spell on the Easter Bunny to grab the Chocolate Chips and teleports away.

Once the cutscene is over, you’ll continue from north of the Al-Kharid toll gate. So, go to the Easter Bunny again, who will now need a churning machine to make the ice cream. He’ll ask you to speak to Ellis the Tanner for the junk behind his building. 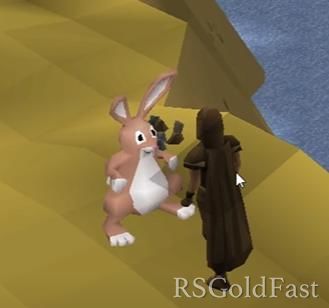 He’ll allow you to use the junk parts, and advises that you speak to Zeke for the mixes. He’ll also mention that vat needs cleaning as it’s dirty with tanning chemicals while suggesting that you speak to Ali for tips on how to clean it.

Head to the building east of Ellis and speak to Zeke. He’ll give you a set of Blunt Scimitars to use as mixing blades. After that, speak to Ali and he’ll tell you about a Magical Cleaning Potion in his possession to clean the vat. However, in exchange for it, he’ll want progress reports on the Easter Bunny’s Choc-Ice Eggs.

Head back to the Easter Bunny, and search the scrap just east of him to get a Tanning Wheel, Wooden Pole, Washing Line, and a Dirty Vat. Use the potion on the vat to get it cleaned, and then use it on any of the other parts to obtain a Churning Machine.

Speak to the Easter Bunny, who will ask you to cool the machine at Ferox Enclave. Another cutscene will be triggered with Phoebe and Camarst. She’ll obviously agree to freeze the churn as she was satisfied with the Chocolate Chips. 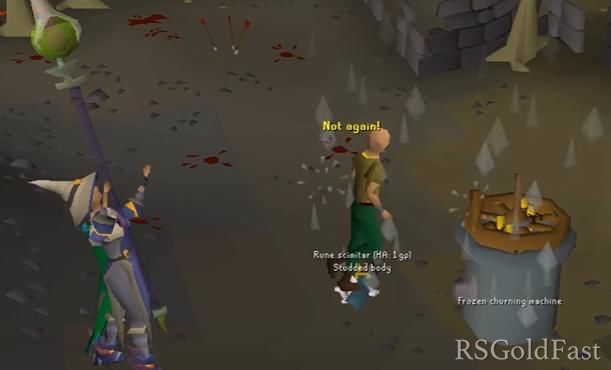 However, as she’s about to cast the spell, Xi_plzPetDogz_xiX’s items appear on the ground, and he reappears to pick them up. Sadly, he gets caught up in the spell again and dies. Once the cutscene is over, you’ll arrive at the same point as earlier.

Walk south to speak to the Easter Bunny, and he’ll hand over the Bucket of Camel Milk to you. Now, place the Churning Machine on the nearby dirty ground to operate it. The Easter Bunny will stop you in between, add a few Chocolate Chops, and then ask you to continue with the process.

Finally, he’ll need something that can help keep the eggs cool. That’s when you remember that the Suspicious Crate can be a useful element.

Speak to the associate again, and he’ll tell you about the Ice Coolers within the crate. These coolers are insulated boxes filled with ice water, and it is sold by Slayer Masters. Since the crate is too cramped, he’ll give you a spare Cooler for free.

Head back to the Easter Bunny, who has just made ice cream-filled eggs. He’ll ask you to check the durability in the desert heat with a normal Easter Egg and an Ice Cream Easter Egg.

So, head towards the Shantay Pass and remove the eggs from the cooler. Speak to Shantay and wait until the following message pops up, ‘...That's long enough! I should go and let the Easter Bunny know the good news.’ Finally, once the conversation is over, head back to the Easter Bunny to collect your reward.

Once the event has been completed, you’ll receive a Crate Ring to transform into a crate, an Easter Hat, two Easter Eggs (Noted), and previous Easter Event rewards. Alternatively, you can speak to Diango to get the previous rewards.