Lizardman Shamans are reptilian creatures, and way stronger than their normal counterparts. Why kill them? Well, they drop the expensive dragon Warhammer, which makes it definitely worth it! Let’s jump into the guide on how to kill them.

For the ranged setup, use protect from missiles and your best offensive prayer, and if you want, set up your dwarf multi cannon in the northwest corner near the Lizardman Canyon obstruction.

Focus on killing spawns in the Northwest and Southwest. By manoeuvring around an obstacle or moving a few spaces away, move out of the way as soon as you see them jump, and dodge the minions. Just keep distance and work through the obstacles.

Remember that hugging the obstacle or wall will stop the shamans from jumping. For the gear, look to use your best ranged setup, preferably using items such as the Shayzien armour set, a toxic blowpipe, ava’s assembler, and necklace of the anguish.

For the melee setup, active Protect from Melee, and if used, set up your dwarf multi cannon northwest by the obstruction in the Lizardman Canyon, or set up your cannon in southwest open area. By manoeuvring around an obstacle or moving a few spaces away, move out of the way as soon as you see them jump, and dodge the minions.

For the equipment, you should look to use your best melee setup preferably with the Shayzien armour set, amulet of torture, infernal/fire cape, scythe of the vitur, avernic defender, berserker ring and a saradomin godsword for your special attack weapon.

For the inventory, you should have your special attack weapon, a divine super combat potion, an antidote of some sort, 4 prayer potions, a rune pouch with nature, lava and water runes for high alch and casting bones to peaches, dwarf multi cannon and cannonballs, Xeric’s talisman, an emergency teleport and food.

Where to find them 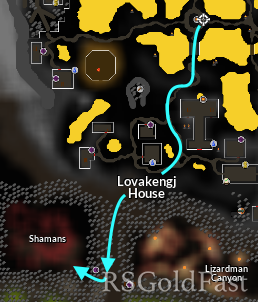 The Lizardman attack with melee, ranged and a special attack. For the melee attacks, it’s a standard attack with a standard animation. The same goes with ranged, but this can also poison. 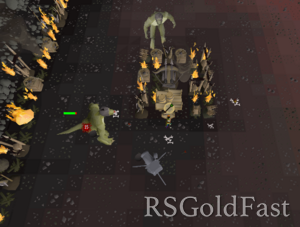 For the special attacks, the Lizardman shamans have three special attacks which can be used without cooldown. First, is the acid spit, where the shaman spits a huge ball of acid at the current position of the player. This will do irresistible damage to the poison for up to 30 losses. The special attack can be poisonous. The damage is minimised if you wear a full set of Shayzien armour, gained from killing the Combat Ring soldiers. While you can still be poisoned, wearing the full tier 5 Shayzien set negates all the damage done by that attack. Next, is the jump attack, where the shaman leaps into the air before crashing down at the spot where they jumped. You can stop this by getting out of the way. When you're stomped by the shaman, you'll suffer heavy damage that's not resistible. If the player is next to an obstacle or wall, shamans cannot climb, as they occupy a 3x3 area. Lastly, are the spawns, where the shaman summons three spawns next to the player who will accompany the player on spawning, unless the spawns are summoned in a position where the player is not seen by them. The spawn will explode after several seconds, causing 8-10 damage on players who are two or less spaces from it when it explodes.

That wraps up our OSRS Lizardman Shaman guide! Go get those shamans, and good luck getting a dragon Warhammer! And buy osrs gold cheap on RSgoldfast.com, 24/7 online.