Last Man Standing, generally referred to as LMS, is a battle royale, player versus player minigame in which the player, along with 4-24 others, is transported to an island where they have to fight for their life, killing each other and stealing anything they can to become the last man standing.

Players can start the minigame by talking to Lisa, to the east of the Clan Wars zone. Items cannot be brought into the minigame; all objects in the hands of the player are immediately removed for the duration of the game and restored when the game is finished. Alternatively, you can use a bank deposit box near Lisa to deposit all of your items.

Upon speaking to Lisa, players will be given the choice to participate in one of three game modes: Casual, where players can participate without reward and can start a game with four players, although their rank on the high scores is not affected. Competitive, which needs a minimum amount of total level 150 to participate, and players are awarded playing points and their position on the high scores is affected. To start a competitive game, there must be 24 players. The players rating will get changed and shown in the chat window after a successful game. High Stakes, which is similar to competitive mode, but players must pay 500,000 coins to participate. This game mode is not always active, but at least it is allowed for richer players. Ironman accounts can't play the high stakes.

The combat stats of the character, as well as Agility, are improved to 99 for the duration of the game upon arrival on the island. The only exception is Defence, which is changed to 75. All prayers except Redemption and Preserve can be used, and the player's spell book is transferred to the Ancient Magicks, even if Desert Treasure is not completed. Additionally, both infinite run energy and infinite prayer are provided to the players. The stats of the player, run strength, and special attack, and supplies are all replenished after killing a player. 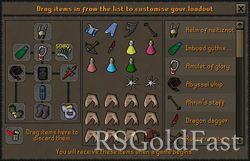 Players are given a default pre-set of items provided upon arrival, including a specific rune pouch capable of casting Blood Blitz, Blood Barrage, Ice Blitz and Ice Barrage. Just east of Lisa's supply chest helps players to arrange their inventory and loadout equipment to their personal preference. It should be noted that players cannot have for their loadout more than eleven sharks and two cooked karambwans and cannot be picked up from the loot of a slain player if they have the same amount of food.

After a minute, the game will announce that the island will soon be filled with lethal fog and the safe zone that players will have to go to, to prevent harm from the fog that will be marked by fog markers (appearing as flashing orbs) and a yellow arrow. Players that are not in the safe zone after 9 minutes and 10 seconds will take swift damage, starting at about 1 damage per tick, but growing gradually to 10 damage per tick.

Players will also obtain a bloody key (or a bloodier key if there are less than five players) that they can use to get more powerful equipment on a table. Players will also be unattackable for 20 seconds during this period, allowing them period to find a chest to loot as well as to prepare for the next battle against another player.

Chests opened with bloody keys roll out from two loot tables for an object, one of which contains offensive equipment, and the other defensive, while bloodier keys access a loot table upgraded. If an opponent logs out before they are killed, a bloody / bloodier key will still be issued to the attacker.

Playing a casual game doesn't offer rewards. Players are given a certain amount of virtual points in high stakes games based on their success in a game. 1st place gets 7 points. 2nd place gets 4 points. 3rd and 4th place get 3 points. 5th to 9th place gets 2 points. 10th to 19th place gets 1 point. Players get a bonus point for killing three players in a game, or two if five or more players have been killed. The bonus points don’t stack together. You can exchange your points for rewards at Justine’s reward store. For high-stakes games, the match's sole survivor will win 7,500,000 coins and 2,500,000 coins will be awarded to the runner-up, which is deposited in a chest near Justine where the player will claim it at any time. They will have their next high stakes free play for players in third to fifth place. As the entry into the game involves a minimum of 24 players, 12,000,000 coins are placed into the match. Of these, 10,000,000 are allocated to the last two players and three players have free access to their next game, eliminating 1,500,000 coins placed in a single match, which ensures the Last Man Standing acts as a money sink with at least 500,000 coins leaving the game on high stakes.