Death Plateau is a novice quest of medium length which is the catalyst for many, many more quests in Troll quest series. This quest allows players to help the Burthorpe Imperial Guard gain access to the Death Plateau, all with the aims of defeating the trolls. We’ve got a step by step guide to completing this quest – so sit back and follow along!

- Asgarian Ale (can be found in the pub in Burthorpe)

- Premade blurb’sp. Or Blurberry special (can buy at Blurberry Bar)

- We recommend you also bring along a games necklace to teleport to Burthorpe, as well as stamina and/or energy potions to make your travels quicker. 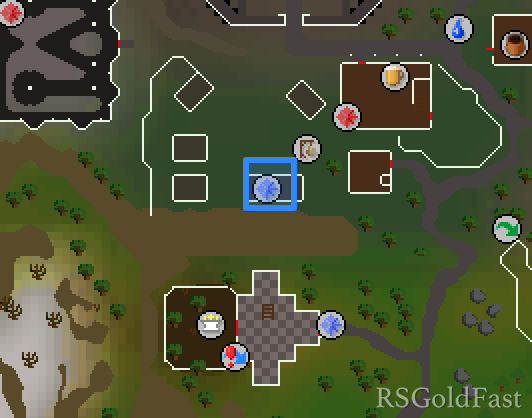 To start the quest, you’ll need to head to Denulth, who is located in a tent directly southeast of the Warrior’s Guild, as shown on the map adjacent.

In conversing with him, he’ll tell you that the trolls have taken over the Death Plateau, and it’s impossible to reclaim due to the heavy troll presence. He’s instructed you to find your way to Death Plateau. It’s time to get to work! 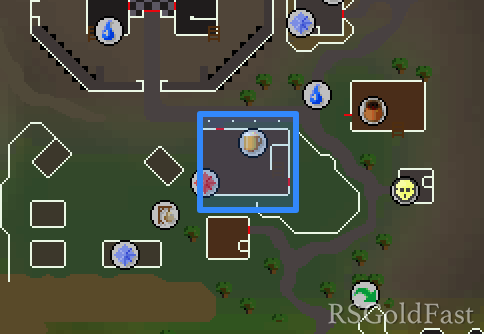 For this part, you’ll need your Asgarnian ale, 60 coins, as well as either your Blurberry special or Premade blurb’ special. If you don’t have the latter, you can buy these items at the Blurberry Bar, which is located in the Tree Gnome Village.

With your items, head to the top floor of the Burthorpe Castle, just north of where you started the quest. There, you’ll find Eohric.

Talk to him, and he’ll tell you that the guard on duty, Harold, is currently located in the pub in Burthorpe. So, it’s time to head to the pub! 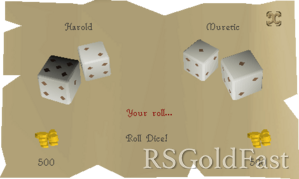 The pub can be found southeast of the castle, as shown by the map adjacent. When you’re in, head upstairs and you should find Harold. Harold unfortunately doesn’t want to talk to you – so you’ll have to head back to Eohric to learn what to do. Eohric will inform you that you’ll need a beer and be willing to gamble with Harold. If you don’t have your Asgarnian ale – this is the perfect time to get it at the pub! Head back to Harold upstairs. Talk to him and you’ll give him your ale. A chat dialogue will appear, and select “Can I buy you a drink?” You’ll then hand him your blurberry special. After that, in the next chat dialogue, select the “Would you like to gamble?” option. From here, you’ll have to select a bet size, which has to be between 60 and 1000 osrs gp. Continue gambling with him by rolling the dice when the option presents itself. Eventually, he’ll give you an IOU paper.

When you receive the IOU, click on it to read it. Skip through the text, and your IOU will disappear, and you’ll find a combination lying around in your inventory. In case you didn’t take note of it, the combination is: 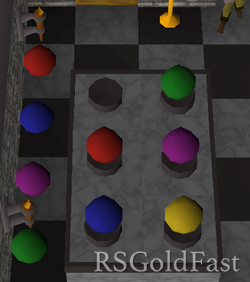 For this part of the quest, all you’ll need is at least 1 free inventory space. When you’re head to the Burthorpe castle, and on the western wall, you’ll find an array of coloured stone balls. Pick up all the stone balls, and now you’ll have to arrange them in a specific arrangement. The order is not specified, but as long as you arrange it properly, you’ll be fine! Follow the arrangement as shown by the picture adjacent (the picture is facing north). In case you can’t see the picture, the blue stone is in the bottom left, the yellow is in the bottom right, the red is in the middle left, the purple is in the middle right, the green is in the top right, and the top left is empty. Make sure you read the combination before you finish placing the stones, or else you can’t progress to the next stage of the quest.

Head through the door slightly north and climb the ladder. In there, you’ll find an archer. Make sure you do not attack him, and simply just talk to him. He’ll thank you for getting the door open, and now it’s time to go to Death Plateau! 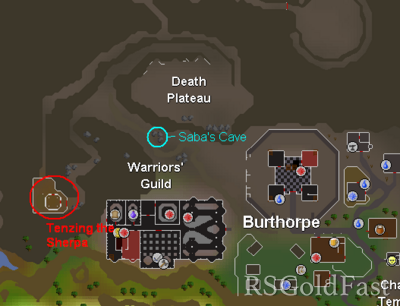 For the fourth part of this quest guide, all you’ll need is 1 free inventory space. To start, exit the castle and head north west, towards the Death Plateau. You’ll eventually find Saba’s cave, from which you should enter it. If you’re lost, we’ve provided a map. Talk to Saba and ask him if he knows of another path to Death Plateau. He’ll eventually provide you a secret path to the Death Plateau, which starts from a Sherpa’s house.

Leave Saba’s case, and continue heading west. You’ll eventually hit a fork in the road, where the path splits north and south. Be careful not to head north, as it is quite dangerous. Head to the southern path, and you’ll find the Sherpa’s house. After he lets you enter, talk to Tenzing and ask for his help. Agree to fetch the items he desires, which are 10 bread, 10 cooked trout and spiked boots. 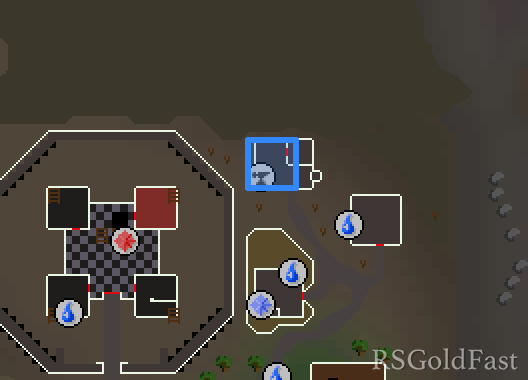 Nearly finished! For this part, you’ll need an iron bar, empty inventory slot and the climbing boots Tenzing handed you. Head back to Burthope (preferably by the games necklace teleport to get there quickly). Travel north east until you find Dunstan, who is next to an anvil, as shown on the map.

After talking to him, he’ll agree to change your climbing boots into spiked boots. The only condition for this being that his son is made to an Imperial Guard, and that he has an iron bar.

So, head to Denulth, where you started the quest. After some dialogue, he’ll hand you a certificate for Dunstan’s son to become an Imperial Guard. Head back to Dunstan and hand him the certificate, as well as your iron bar, and he’ll give you a pair of spiked boots. Unfortunately, you can only have one pair of spiked boots, so treat them with care!

Part 6: Into the Mountains

The final part – hooray! For this, you’ll need 10 loaves of bread, 10 cooked trout, your combination and the spiked climbing boots. Ensure that everything is un-noted. With all your items, head to Tenzing, using the same route as before. Scroll up to find the map if you’re lost! 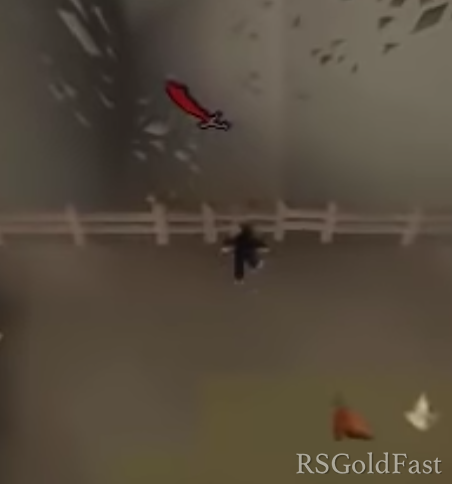 After talking to Tenzing and trading him your items in exchange for a secret map, exit his house using the northern door, and climb over the stile. Continue following the path. As you keep walking, you’ll eventually reach a point where your character tells themselves that they have travelled far enough. At this point, it’s time to head back to Burthorpe. Either run back or use your games necklace teleport.

Back at Burthorpe, speak to Denulth, and there you go – quest complete!

Your rewards for completing this quest are 1 quest point, a very respectable 3,000 attack experience, steel claws, and the ability to make claws. Furthermore, you can also be able to purchase climbing boots from Tenzing the Sherpa whenever you like.

As you’ve completed Death Plateau, you can now be able to complete Troll Stronghold and Troll Romance. See you in another guide! And RSGoldFast offer you the best osrs gold & runescape 3 gold all the time, buy now, 24/7 online.