Cabin Fever, the third quest in the Pirate quest series, allows players to learn to become a pirate as they help Bill Teach in running his ship. So, let’s jump into the guide for it! 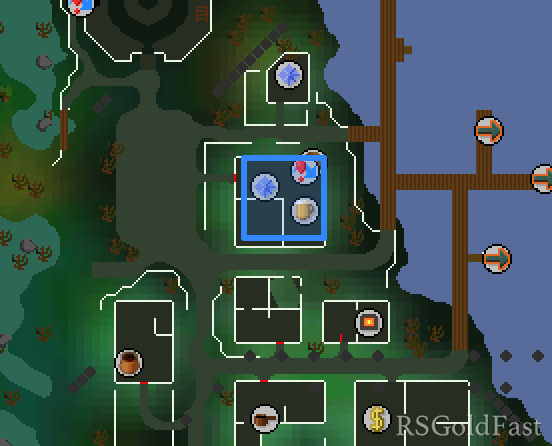 To start the quest, head to Port Phasmatys. Bring your ecto-tokens (or coins) and your ghost speak amulet if you haven’t completed Ghosts Ahoy. Speak to Bill Teach in the Green Ghost inn, as shown on the map. Bill will tell you that he needs a pirate to help him leave the port. After accepting to help him, he directs you to meet him on his ship. So, head to the Port Phasmatys docks and board the easternmost ship, called ‘The Adventurous’. Speak with Bill and you’ll start heading to Mos Le’Harmless.

You’ll encounter a cutscene, where you’ll see an enemy ship start firing on the ship that you are on, which destroys the ship’s hull and cannons. Bill instructs you to first take care of the enemy’s cannon. He tells you to grab some fuse and robe from the bottom deck of the ship. So, head to the bottom deck and search the repair locker and take out four ropes. Then search the gun locker which is located near the repair locker, and you’ll find a fuse. In the southern corner, you’ll also see a tinderbox which you should grab.

Then, climb up the ship’s ladder to get the main deck, and use the climbing net to get up to the main mast. Then, use your rope on the hoisted sail of the ship to swing over to the enemy ship. In the case you fail the jump, simply try again.

The enemy ship is filled with pirates that are level 57. Ensure that you stay away from them, if you are a low level. You can escape them by climbing the net on the mian mast. So, you’ll need to find the powder barrel which is next to the cannon on the west side of the ship’s deck. Use the fuse on the powder barrel. Then, light the fuse to blow up the barrel, as well as the cannon. Then, climb back on the main mast of the ship by using the net, then use a rope to swing back to your ship. You can get a rope in the southwestern corner of the enemy’s pirate ship deck. 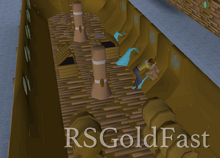 It’s time to rebuild your defences. Talk to Bill, and he’ll instruct you to repair the damaged hull. To do so, climb down the ship ladder and search the repair locker, and you’ll find 6 repair planks, 30 tacks, 3 swamp paste and a hammer. There are 3 holes to fix, and each hole needs two planks, ten tacks and a swamp paste. For the holes, use the repair plank on it, then the swamp pastes to patch it up. Go back to Bill and talk to him.

Bill will then ask you to pillage the enemy ship and bring back their loot. So, go to the main deck, climb the net, use the rope that is on the hoisted sail and swing back to the enemy ship. Climb down the ship ladder, then steal from the chest, loot the crate, and ransack the barrel to get enemy plunder (you will need to be patient and wait for it to respawn). You’ll need 10 plunder. To respawn the plunder, simply log out and back in. With the 10 plunder, head back to the main deck and go back to your ship using the same method. Climb down the ship ladder and use the plunder on the plunder storage at the back.

Bill will then direct you to prepare a send-off for the enemy. So, you’ll need to prepare the cannon and fire the cannon when the enemies are in front of the cannon on their ship. Tpo repair and fire the cannon, first climb down the ship’s ladder, search the gun locker and take a cannon barrel. Then, climb back up and left click the broken cannon to fix it. Talk to Bill, and then go below and search the gun locker to get a ramrod, a cannon cannister some fuses (preferably 4). Then, head back to the main deck and choose the take-powder option from the powder barrel that is next to the cannon. 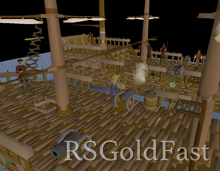 If you miss, use the ramrod on the cannon to clean it out then repeat the previous steps until you hit. If you forget to use the ramrod to clean out the cannon, the cannon will explode, and you can replace the broken barrel with a new one which you can find from the gun locker. Don’t fire the cannon right after attaching the fuse, wait at least 3 seconds.

After hitting the pirates with the canisters, talk to Bill. He’ll tell you to sink the enemy pirate ship, which you can do by blasting holes in its hull. 3 holes should suffice. So, go down below, and take 3 cannon balls from the gun locker (or more). Head back up to the main deck, then clean the cannon out with the ramrod and repeat the previous steps (except you’ll be loading the cannon with a cannonball, not a canister), until you hit the enemy ship 3 times.

You’ll see a cutscene with Bill Teach talking with Mama Le’Fiette in The Other Inn. Bill then thanks you and hands you the Book o’ piracy. And there you go – quest complete!

The rewards for completing this quest are: 2 quest points, 7000 crafting experience, 7000 smithing experience, 7000 agility experience, 10000 coins (by speaking to Bill Teach after the quest), access to Mos Le’Harmless, ability to kill cave horrors, the Book o’ piracy, 50% discount on charter ships, and the ability to play the Trouble Brewing minigame. Cabin Fever is also required for completing the Great Brain Robbery, as well as a part of the Morytania Diary.

Good luck. See you in another guide! Our shop offer the cheapest OSRS Gold & RuneScape 3 gold all the time, 24/7 help service for you.