A Soul’s Bane is an OSRS quest that focuses on finding the lost son of Launa Talvoy, who has unfortunately disappeared in a rift outside of Varrock. Let’s jump into it!

For this novice and medium quest, you’ll need a rope, as well as a weapon to kill multiple enemies of at least level 45. We also recommend you bring along some food, a dig site pendant, anti-poison potions and armour. Let’s jump into it!

To start the quest, go east of Varrock, by the gate near the Earth Altar, and just south of it, speak to Launa. You could also use the dig site pendant and head west. Or, you could take a glider to the dig site. Laura explains she's searching for her son, Tolna, and her husband, all of whom have gone down into the rift. Offer to help her find them, then use a rift rope and crawl downwards. There are four "rooms" you need to get through to complete your quest, as well as a final room for the boss. Every room will have multiple enemies for you to kill to move to the next room. Getting food and anti-poison is recommended, but you can leave at any point during the quest to get food or supplies. You would need to start in the room you were in if you left, though, if you had not completed the room before you left.

This room has four types of monsters that must be killed to fill a meter of rage. After entering this room, you will see a rack of weapons containing four types of weapons, each corresponding to a different monster. The correct weapon should handle normal damage multiplied by 10. These are the right combinations: Anger Sword – kills Angry Unicorn, Anger Spear – kills Angry Bear, Anger Mace – kills Angry Giant Rat, Anger Battle axe – kills Angry Goblins.

Unequip your own weapon and pick and handle any of the weapons from the rack. You can only take one weapon at a time. Each killed creature raises the bar at the top of the screen to "rage level." The bar will hit maximum after several kills of the player's choice of angry creatures, and the player must yell, turn, and kill all remaining monsters in the room. Then a cutscene will be played in which Tolna leaves his mother for a more prosperous life, and players will then leave the rage room near the cave's east end and head to the next room.

You’ll have to check out the dark holes in this space. You'll find in some of them Fear reapers that you have to kill to advance. If you check the hole, there's going to be a tiny jump scare. You've got to kill about five or six before your character says they're no longer afraid, and you can go to the next room. 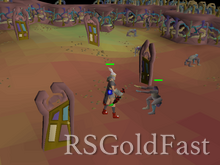 There are quite a few confusing doors in this room. There are also five Confusion beasts, but at the time only one of them is real — other are illusions, so you're not going to inflict any harm on them. The illusions will actually vanish eight times after you hit zeroes on them. You can continue to attack the beasts until you find the real one that is really going to hurt and kill, or disengage by running to the opposite corner, then attacking another. If you destroy the real one, one of the confounding doors will close and the rest of the beasts will respawn. Repeat the cycle until there is only one door left. Every kill will remove one door which is not working. Note that for this stage, ranged or magic is better, because the beasts use a ranged attack. They can also use a melee attack by using melee which has a risk of poisoning (use your throwing knives if you have them because they allow the illusions to kill quickly). The illusions will chase you and prohibit you from attacking any of the other monsters when you are still attacking an illusion. Just sprint to a far side of the room until they lose interest or start attacking them until your character says something about it all the time being an illusion and they're gone.

You will find five hopeless creatures in this room. Every monster has to be killed three times each to bring them to death. Be cautious to eat as 75 per cent of the health of the beast is restored. In fact, if they are poisoned, they lose the poison effect when they enter their next phase. The Bridge of Hope will emerge after they've all gone. Go through the exit, after crossing the bridge, and you will see a short cutscene.

In the final room is Tolna, a three-headed beast. To get him back into a human you will have to destroy his monster shape. Beware that this is a multi-combat environment, and you'll be targeted by all three hands. They use a wide-ranging attack from a distance, and when close up they will attack you via melee very rapidly. They're not very powerful, but they attack you quickly and they're going to poison you so bring anti-poison and decent food. If you use Ranged or Magic, the three heads are very easy to beat. When each head has been killed and Tolna has been made human again, speak to Tolna and he will take you back to the surface. Speak to him again and he’ll reward you.

Congratulations – quest complete! The rewards for this quest are: 1 quest point, 500 defence experience, 500 hit points experience, 500 coins and access to the Dungeon of Tolna. You can know also contribute to completing the Medium Varrock Diary. See you in another guide! And buying OSRS Gold quickly & safe here, hope you like us.