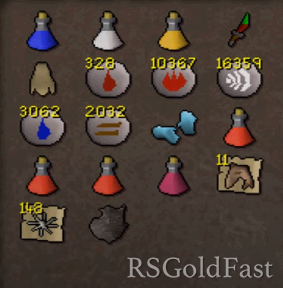 · Horror from the Deep

· Potions to restore your stats (Karamel will lower them)

· Decent armour and weapon depending on the boss you’re up against.

Once the members of the council have been freed, you will get into a cutscene where Aris casts a spell and restarts time. When this happens, the Culinaromancer will come into his dimension through the portal.

When you enter the dimension, you’ll find Culinaromancer, as well as several portals that will either lead back to Lumbridge or one of your previous quest bosses. The dimension cannot be used until and unless the first five bosses have been defeated.

Leaving the fight to re-stock after defeating each boss will not result in your progress being lost.

He is Agrith Naar from the quest ‘Shadow of the Storm’, but in the dimension, he is someone who is made of bananas and has a higher combat level. His fighting style is melee if you’re up close, and fire blast if you’re at a distance. Upon defeating him, you’ll get a banana as a drop.

This NPC is Fareed from the quest ‘Desert Treasure’ and has a combat level of 149 in the dimension. To kill him, you’ll need ice gloves to wield a weapon. If you try to attack him without using the gloves, it will result in your weapon being dropped. The area where the fight occurs is instanced, so if you leave without picking your weapon up, you’ll lose it well. Fareed is quite hard to defeat without any help from prayer, but if you use good healing food, you can kill him eventually. He can also be safe-spotted beside the portal, however, it doesn’t always work but it’s worth a try.  In your using the fighting style of a mage, it is recommended that you use water spells. You can use snare of him, run at a distance, and then made him so that you can kill him with sufficient food in your inventory. If you’re using range, you must use ice arrows or a crystal bow, along with ice gloves. Upon defeating him, he’ll drop cakes. 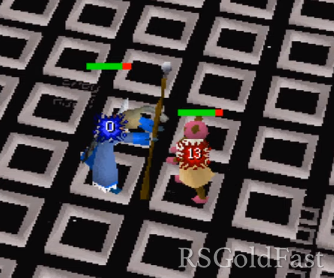 She is known as Kamil from the quest ‘Desert Treasure’ and can be defeated by fighting up close with the best fire spell that you can cast. As she lowers the player stats, it is recommended that you bring restore potions along with you, as well as a good healing food. Melee doesn’t work on her very well, so a strategy would be to use firebolt spell while wearing chaos gauntlets. It is best to stand next to her so that she can only use melee on you, as her melee attacks are not very strong and do little to no damage. Due to her freezing effects stopping your auto attacks, it is beneficial to manually cast spells. Upon defeating her, she’ll drop choc-ice.

Iban blast can be used very effectively, as Kamil (Desert Treasure) is immune to the spell, whereas Karamel is not. 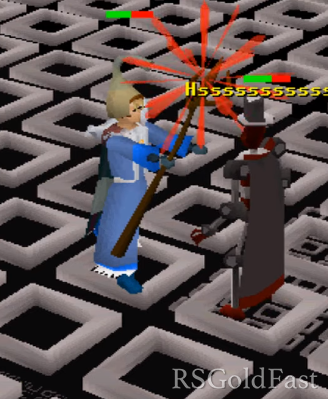 Also known as Dessous from the quest ‘Desert Treasure’ and can be defeated by effective spells such as Iban Blast that work well on him. Using melee to defeat him won’t work, however, he is resistant to stab weapons. Ranged is also a good option and works well on him, but do be careful and bring lots of food and make sure to defeat him as quick as you can. Upon defeating him, he’ll drop chocolate dust.

The mother of all Dagannoths from the quest ‘Horror from the Deep’ and keep that in mind, you’ll need to bring the four main attributes of runes; Air, Water, Earth and Fire to kill her during her weakness stage. Her attacks are ranged bases that’s hits twice per attack, in which one is magic based and the other is ranged resulting in at least 20-40 damage to your hit points. Players with 80 or fewer hit points level can easily die if luck is not on their side. The fight is very easy, but the duration is long so it is best to only carry three valuable items along with you to avoid losing any important gear. Her colour is changed depending on her weakness, so keep that in mind and attack her accordingly. Because of her high melee defence, it is not recommended that you attack her with melee but instead focus on the style mage or range as her defence is quite low when it comes to these two fighting styles. Her attack can go through magic robes, so it is better to mage her while you’re wearing a rune armour or anything above.

Once you’ve defeated the final boss (Gelatinnoth Mother), the Culinaromancer will himself appear in front of you and start attacking. Even though his combat level is just 75, his hits can rapidly do damage of up to 25 with magic. You can kill him with any attack style as he has no defence, but do remember to bring a good amount of food with you. To avoid his magic hits, you can use magic armour with good defence, such as dragonhide. Upon defeating the Culinaromancer with a full inventory, the reward lamp will be dropped at your feet once you return to the Lumbridge castle.

And thank you for reading this guide, get cheap OSRS Gold from us, you will get more off, good luck.